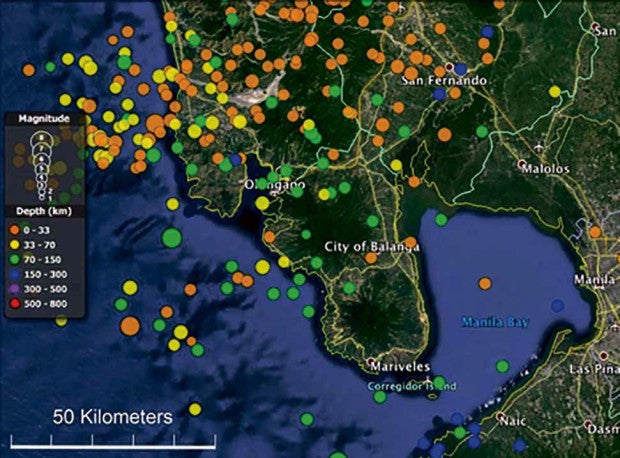 SHAKY GROUND Earthquakes of moderate magnitude have occurred on Mt. Natib and in the vicinity of the mothballed Bataan Nuclear Power Plant (BNPP) in Morong, Bataan province, since 1951, as shown in this illustration from Kelvin Rodolfo’s study, “Geological Hazards of the BNPP: Propaganda and Scientific Fact,” based on data from the USGS National Earthquake Information Center.

CITY OF SAN FERNANDO— An active earthquake fault in Pampanga province runs through Natib volcano and the Bataan Nuclear Power Plant (BNPP) sits on it, which geologist Kelvin Rodolfo says is reason “beyond a doubt” for the Duterte administration to stop its plan to activate the BNPP.

Rodolfo cited on Tuesday new information in an updated scientific review following the green light given last week by President Duterte to the revival of the mothballed 40-year-old BNPP in Morong, Bataan province.

He thanked Recto’s “voice of sanity” for arguing that scientists, not bureaucrats, must approve the rehabilitation of the plant.

First written in July 2010, Rodolfo’s revised version of the paper, “Geological Hazards of the Bataan Nuclear Plant: Propaganda and Scientific Fact,” said that he, professor Fernando Siringan and his students first noticed the Lubao Fault in 1997.

They were studying the sinking of land off the coast of Bataan, Pampanga, Bulacan and Camanava (Caloocan, Malabon, Navotas and Valenzuela) areas.

A lineament is a feature in a landscape expressing an underlying geological structure like a fault.

Based on data from the US Geological Survey National Earthquake Information Center, many earthquakes occurred on Mt. Natib between 1951 and 2016.

“Many of the earthquake epicenters plot along the [Lubao] lineament which, if extended farther, trend to Napot Point,” the geologist said.

A group of scientists, headed by professor Mahar Lagmay, used “sophisticated satellite data to show that the lineament is an active fault, and that its northwest side is moving slowly southward relative to the southeast side,” Rodolfo said.

The group also determined that the rocks at Napot Point were “deposits of pyroclastic flows and lahar, testimony to the susceptibility of the BNPP to those dangerous volcanic hazards,” he said.

“Equally ominous, these rocks are severely deformed by faulting,” he added.

Another important development that should be considered, he said, was the nuclear disaster that took place after a 9.0-magnitude earthquake triggered a tsunami that damaged the Fukushima Daiichi nuclear plant in Japan on March 11, 2011.

Rodolfo suggested that Filipinos learn from the lessons of Fukushima.

“If the Japanese, with their much more developed culture of safety, can fail so badly, what does this bode for the Philippines?” he asked.

A professor emeritus at the Department of Earth and Environmental Sciences at the University of Illinois in Chicago, Rodolfo said the activation of the BNPP was the “greatest threat to the well-being of the Filipino people and their environment.”

He said: “The natural dangers are being greatly compounded by nuclear proponents of great influence, who know little geology. They select ‘facts’ that defend the safety of the plant site and ignore ‘inconvenient’ scientific truths that are easily available and verifiable. This is not only dismissive of the dangers to the people, it is a great disrespect and disdain for natural-hazard science.”

Mt. Natib spans more than the entire northern half of the Bataan peninsula. It has two calderas, the second almost as big as what Mt. Pinatubo produced in its 1991 eruptions.

“If caldera size is a measure of eruption power, the one that produced the large Natib caldera was much stronger than Pinatubo 1991,” he said.

He called attention to the disposal of water that would be used to cool the reactor core and spent fuel rods. “Even if an eruption were predicted in time to shut the reactor down, it would not be possible to evacuate the spent fuel rods,” he said.

Interruption of that water supply could be catastrophic, as what happened in Fukushima in 2012, he said.

“The casual dismissal of the geohazards at Napot Point by [former Pangasinan Rep. Mark] Cojuangco and other nuclear proponents carries on the tradition of hurried carelessness exercised by the dictator Ferdinand Marcos, who decided to build nuclear reactors in 1973 and forced the construction to begin in 1976, even before the natural hazards had been properly assessed,” he said.

The 620-megawatt BNPP was set for commercial operations but was mothballed by President Corazon Aquino, who took power in 1986 after the ouster of Marcos, due to safety concerns amid the nuclear fire at the Chernobyl power plant in Russia.

The Aquino administration also claimed that the BNPP was tainted with corruption as Marcos had received kickbacks from Westinghouse, which won the contract to build the plant.