Duterte: Marcos burial at Libingan a go unless SC stops it 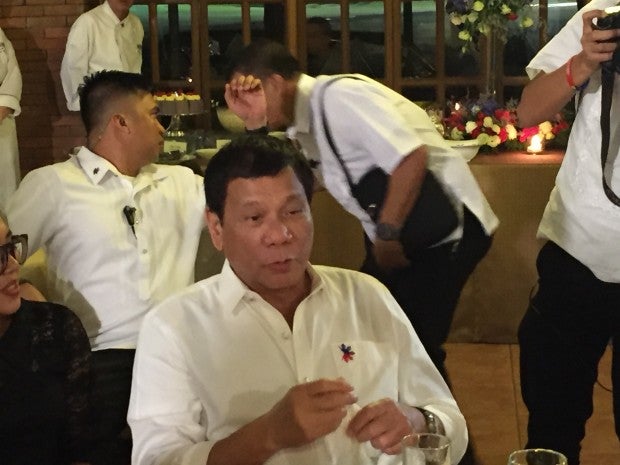 MANILA — President Duterte said on Tuesday night that he would let Ferdinand Marcos be buried at the Libingan ng mga Bayani as it was already allowed by the Supreme Court, adding that the protracted debate over the burial of the dictator was “just a fight between two families.”

Over dinner with a select group of reporters in Malacañang, the President said he would not stop the Marcos family from burying the clan patriarch without any order from the Supreme Court.

Amid the protests and staunch opposition from martial law victims, Mr. Duterte reiterated that Marcos should be allowed to be interred at the LNMB as a former soldier and president.

“This has divided us. Whose column was it? It basically said this is a fight between the two families and we were just dragged into it,” the President said in a mix of English and Filipino, referring to the Marcoses and the family of former president Benigno Aquino III.

He said those opposing the burial should have enacted a law prohibiting Marcos’ burial at LNMB.

“They should have passed a law disallowing or denying (Marcos) to be buried in the (LNMB). Why didn’t they pass a law telling us that his burial cannot take place in (LNMB)? Why didn’t they do it?” he asked.

The President said he needed “something to in my hand” to stop his order allowing Marcos’ burial, which the Supreme Court upheld on Nov. 8.

Duterte said he would not go against the Supreme Court ruling. “I need something to (act upon) in my hand,” he added.

“I must have at the time a paper which says I cannot proceed. Unless I have that in my hands, there is nothing I can do,” he said in an interview streamed live over the Internet.

“Steady as it goes iyan,” he added.

The high tribunal recognized the President’s power to order Marcos to be laid to rest at the cemetery reserved for the country’s heroes, former presidents, former soldiers and dignitaries.

The move to bury Marcos at the cemetery for heroes has generated outrage among the victims of human rights violations during martial law, who said it was an insult to the spirit of the EDSA people power revolution that ousted the dictator and sent his family into exile.  SFM