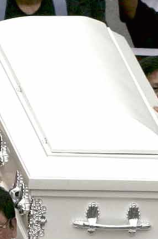 Only a handful of people – mostly family members and relatives – attended the funeral of Raul Yap at the public cemetery here on Monday afternoon.

Among those who attended were Yap’s wife, Alma, and two sisters who arrived from the United States for his funeral. They asked the media to give them privacy.

Yap was killed by members of the Criminal Investigation and Detection Group in Eastern Visayas (CIDG-8) who claimed that the inmate fired at them when they served him a search warrant past 3 a.m. on Nov. 5.

Espinosa was also shot and killed because, according to the CIDG-8, he to put up a fight while in detention.

But senators looking into the killing said the deaths of both Espinosa and Yap were premeditated.

In an earlier interview, Alma Yap said they had no plans of running after those who killed her husband.

She recalled that her husband had asked her to buy a cake to celebrate his birthday on Nov. 13.

But they never got to celebrate, she added.

Alma said Yap’s case of illegal possession of drugs was scheduled for promulgation next month.  SFM