Bato willing to go to jail over paid trip 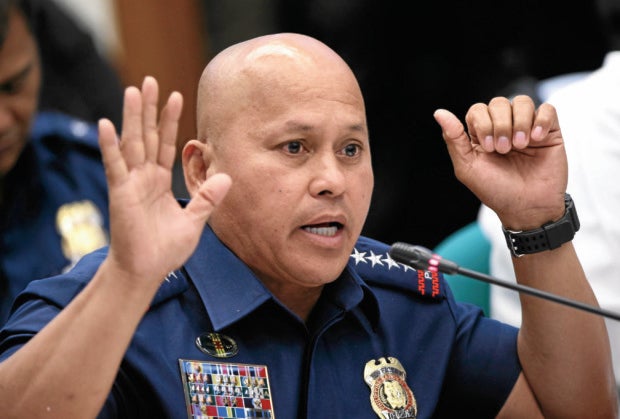 Director General Ronald dela Rosa, Philippine National Police chief, on Monday said he was willing to go to jail for accepting an all-expense paid trip from Sen. Manny Pacquiao for his family’s recent visit to Las Vegas so they could watch the latter’s fight against Jessie Vargas.

“I don’t regret it. At least I’m honest and transparent, and I was able to give my family quality time and it was for free,” Dela Rosa said without showing signs of remorse at a press conference in Camp Crame in Quezon City.

The PNP chief was reacting to reports that the Office of the Ombudsman was investigating him for possible violation of the law for admitting these gifts from Pacquiao, his longtime friend.

Republic Act No. 6713, or the Code of Conduct and Ethical Standards for Public Officials and Employees, prohibits public officials and employees from soliciting or accepting, directly or indirectly, any gift, gratuity, favor, entertainment, loan or anything of monetary value from any person “in the course of their official duties or in connection with any operation being regulated by, or any transaction which may be affected by the functions of their office.

“At least, it did not come from corruption. I did not ask for it. It was willingly given to me by a friend,” Dela Rosa said.

The PNP chief said that Pacquiao had spent for him and his family’s tickets, accommodation and even allowances during their Las Vegas trip to watch the Pacquiao-Vargas fight. Pacquiao has defended this decision.

He said he just hoped the Ombudsman would be fair to him in its interpretation of the law.

“On my part, if the investigation showed that I violated the law, I’m willing to go to jail. What’s important is I’m honest. I told the truth. I was transparent. If I did something (against the law), I will be man enough to go to jail,” he said.