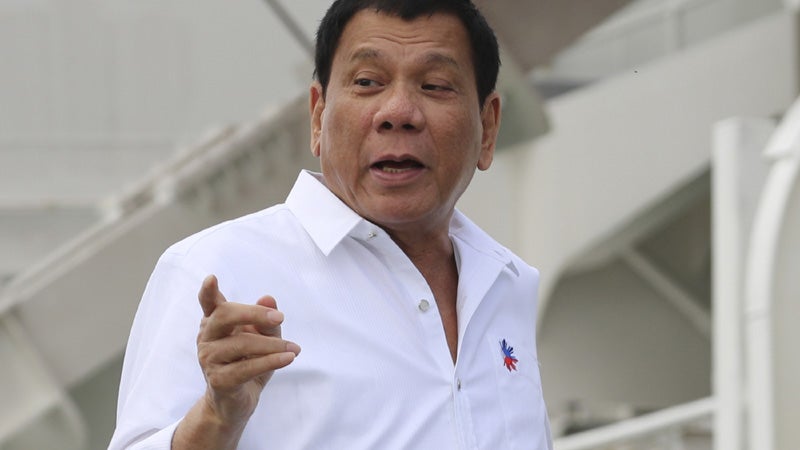 At least five senators saw no need for President Duterte to suspend the privilege of the writ of habeas corpus that would allow law enforcers to make warrantless arrests.

Senators Franklin Drilon, Francis Pangilinan, Leila de Lima and Bam Aquino, all of the Liberal Party (LP), issued a joint statement declaring that the illegal drug problem, against which Mr. Duterte had waged an all-out war, was not a ground for suspending the privilege of the writ.

The senators pointed out that the government was conducting peace talks with armed groups and that they supported this initiative.

“We see no basis for the suspension of the privilege of the writ of habeas corpus and we shall remain committed to upholding the sacred constitutional safeguards to the rights of the Filipino people,” they said.

Sen. Panfilo Lacson, an independent, said in a radio interview that the suspension of the privilege of the writ would “not speak well of the Philippine National Police’s war on drugs and criminality” because it would mean that the PNP had lost the fight.

The police would be contradicting its statement that crime has gone down by 49 percent, he said.

Lacson said he did not think Mr. Duterte was serious, noting the President’s penchant for “rhetorical statements” and his tendency to engage in a “psywar.” He said he hoped the statement was “just a joke.”

De Lima, a trenchant administration critic who has been accused by the President himself of receiving drug money to fund her senatorial bid in May, warned Mr. Duterte’s remarks could send a “dangerous message to the public” and asked him “to stop toying with the idea … in his desperate bid to legitimize his administration’s flawed war on illegal drugs.”

“To concede to this temptation would result to more innocent blood gushing, human dignity desecrated and the basic human rights being blatantly violated,” De Lima said in a separate statement.

She urged Mr. Duterte instead to review the achievement of his administration’s declaration of a state of lawlessness in the country for the past two months to help “cure the defects of its all-out war campaign on drugs and curb its abuses to prevent extrajudicial killings and summary executions.”

Mr. Duterte on Friday warned he would suspend the privilege of the writ of habeas corpus if lawlessness in the country escalates.

He mentioned the rebellion in Mindanao, the worsening battle with the Maute terrorist group and the alleged widespread illegal drug operations in the country.

The opposition lawmaker said that the suspension of the privilege of the writ might only “further embolden the police to summarily execute suspects or cause their involuntary disappearance.”

“The deadly campaign against drug traffickers and narcotic abuse is not a ground for suspension. Claims of success of peace initiatives in Mindanao belie a brewing rebellion,” Lagman said.