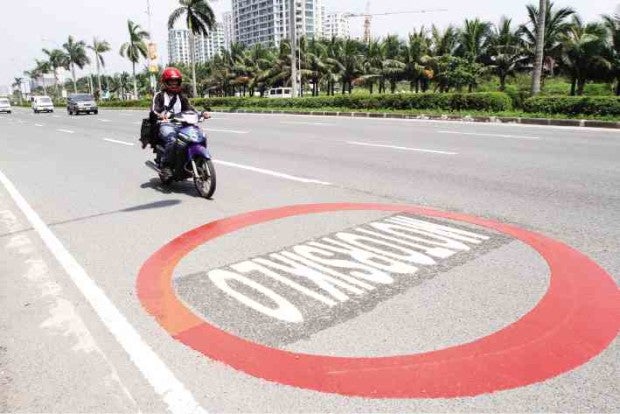 The Metropolitan Manila Development Authority (MMDA) will intensify its enforcement of the motorcycle lane policy on major roads starting on Monday to instill discipline among riders and prevent them from weaving in and out of traffic.

MMDA officer in charge Tim Orbos on Thursday met with officers of the Motorcycle Philippines Federation (MCPF) who conveyed their cooperation in regulating their fellow riders.

The MCPF will join MMDA enforcers in a dry run over the weekend of the implementation of the motorcycle lane on Edsa, Commonwealth Avenue, Macapagal Boulevard and C5 Road, Orbos said.

“Together, we’ll call upon erring motorcycle riders. We will not apprehend them yet, we will just inform them of their violation. Come Monday, we will enforce the regulations,” Orbos told reporters.

The fourth lane from the sidewalk was designated as the Edsa motorcycle lane or “blue lane” by MMDA Memorandum Circular No. 1 in 2012 to curb motorcycle-related accidents.

The MMDA previously established motorcycle lanes on Commonwealth Avenue in Quezon City and Macapagal Boulevard in the cities of Pasay and Parañaque.

Motorcycle and scooter riders who will stray from the blue lane while traversing these major roads face a P500 fine.

They are allowed to deviate only when making a turn, provided they do not swerve and also make the appropriate signals.

According to MMDA records, motorcycles are involved in 30 out of the daily average of 265 vehicular accidents. In 2015, the MMDA recorded a total of 18,668 motorcycle-related accidents in the metropolis, 238 of which resulted in deaths.

Orbos said the intensified enforcement would also include compliance with proper gear such as helmets, gloves, pants and shoes, based on existing regulations and ordinances. Enforcers will also flag down those without side mirrors and signal lights.

MCPF director Atoy Sta. Cruz said they would work with the MMDA in conducting free seminars to orient motorists on road safety and traffic rules. TVJ