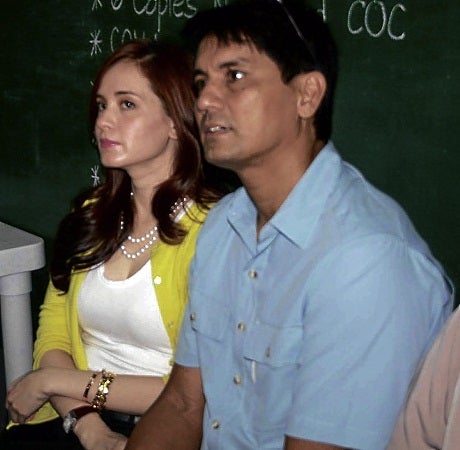 TACLOBAN CITY, Leyte — The lawyer of Ormoc City Mayor Richard Gomez dared those who were linking the chief executive to illegal drugs to present proofs or face charges in court.

Alex Avisado Jr., lawyer of the mayor, his wife, Rep. Lucy Torres-Gomez and her brother, Leyte Board Member Matt Torres, stressed that the three have been against drugs and have been advocates for a clean, active and healthy lifestyle for a long time.

“They have not and and will never get involved in drugs,” said Avisado, in a statement posted on his Facebook account.

“So to those who are desperately trying to destroy their reputation you have been warned! Put up or shut up! We will see you in court!”

Avisado wrote that the couple were in London to represent the Philippines in the World Travel Mart 2016.

An official of the Criminal Investigation and Detection Group (CIDG) Eastern Visayas identified the actor-turned-politician as among those linked by Albuera Mayor Rolando Espinosa Sr. in the illegal drug trade of his son, Kerwin Espinosa.

Chief Insp. Leo Laraga brought up the names of Gomez and other local officials of Leyte in trying to explain to the senators looking into the killing of Espinosa Sr. and another detainee why they had to go to Samar to secure a warrant to search the cells of the mayor and another detainee, Raul
Yap.

Laraga was the leader of the CIDG-Eastern Visayas group who raided the cells of Espinosa and Yap in a sub-provincial jail in Baybay City, Leyte, early morning of Nov. 5.

Both Espinosa and Yap were killed in what the CIDG-8 claimed as a shootout which has become a subject of a Senate inquiry.

In a statement, Loreto said he asked Chief Supt. Elmer Beltejar, police director for Central Visayas, to investigate how he was linked to the Espinosas.

“Being innocent and having no clue, my instinctive response was to immediately inquire about this matter and request full investigation,” he said.

Loreto said that whoever included him in Espinosa’s affidavit should be investigated especially because his name was not even in the bluebook.

“How we wish Mayor Espinosa would have been present so the veracity of his affidavit may be tested. We remain respectful of the late Mayor Espinosa despite belonging to opposing political parties. Condolences to his family.”

Veloso, for his part, also denied protecting the illegal drugs operation of Kerwin, said to be the biggest in Eastern Visayas.

“I will resign immediately if they can show an evidence that I am a protector of the Espinosas,” Veloso said.

Veloso, a former justice of the Court of Appeals and a first-term congressman, said he never knew Kerwin or his father, Mayor Espinosa.

“Why would I be a protector of Kerwin? He is from Albuera, which is part of the fourth district. I am from the third district of Leyte,” he told the Philippine Daily Inquirer in a phone interview.

Like Loreto, he too asked Beltejar if his name was indeed in Espinosa’s affidavit.

“He told me that I was never included in the list as among the alleged drug protectors. He told me not to believe the list. Kalokohan lang yan (It’s rubbish),”Veloso said.

Petilla earlier denied that he was Kerwin’s protector.

The governor said he had asked for a copy of Espinosa’s affidavit after he learned from social media that his name was on the list.

He said he met Espinosa only once – on June 27 during the mass oath-taking of newly elected officials in the province at the Leyte Academic Center in Palo town.

Petilla said Espinosa wanted to join the Liberal Party during the May elections but the governor turned him down amid reports that his family was involved in illegal drugs.

Espinosa ended up running as an independent candidate and defeated three candidates, including the incumbent mayor.  SFM