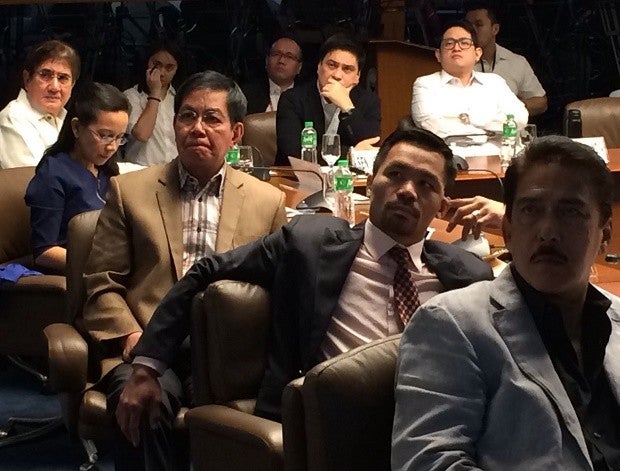 Sen. Panfilo Lacson and other senators at the Senate probe on the death of Albuera Mayor Rolando Espinosa Sr. LYN RILLON/INQUIRER

The Senate began on Thursday its investigation on the killing of Albuera, Leyte Mayor Rolando Espinosa Sr. by members of the Philippine National Police- Criminal In­ves­ti­ga­tion and De­tec­tion Group (PNP-CIDG) in Eastern Samar last November 5.

Police Chief Inspector Leo Laraga, who led the CIDG team that raided Espinosa’s cell at the Baybay, Leyte sub-provincial jail, was among the resource persons invited in the hearing of the Senate committee on public order and dangerous drugs chaired by Senator Panfilo Lacson jointly with the committee on justice and human rights.

Aside from Espinosa, another jail inmate, Raul Yap, was killed during the predawn raid by the police.

Lacson earlier said that Espinosa’s killing was a “clear case of extrajudicial killing.”

The slain mayor was among those on the “narco-list” publicly released earlier by President Rodrigo Duterte. CDG/rga