Surprise and euphoria at Trump headquarters in NY 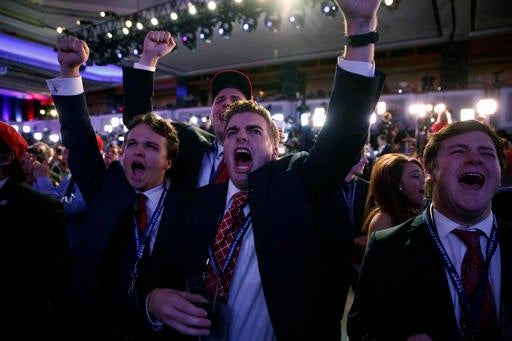 Euphoric Donald Trump supporters transformed into a sea of “Make America Great Again” hats, shouting “USA” and partying late into the night as the billionaire appeared within reach of victory Wednesday.

“We are so excited,” said Aliza Romanoff, a well-dressed, articulate and educated mother of two from Long Island whose family has known Trump for years, out celebrating with her parents and husband.

The crowd swelled in number, flagging energy levels boosted by alcohol and the avalanche of results that some admitted were far better than they ever imagined with Hillary Clinton the strong favorite.

“It’s unbelievable. I didn’t know Trump was really going to pull it off,” said Glenn Ruti, a 54-year-old New Yorker who works in telecommunications, albeit with no winner yet declared in the race.

As Fox News, the TV network of choice for most Trump supporters beamed across the party on giant screens, declared Ohio, North Carolina, Florida, Iowa and Wisconsin for Trump, they broke out into whoops and cheers, clapping their hands, fist-pumping and waving placards.

“He’s going to win and my life is forever changed,” one supporter yelled into his cell phone, seemingly unable to believe it.

Bar staff in black tie rushed around collecting empties or bringing out fresh bottles. There were spontaneous chants of “Drain the Swamp.” That is Trump’s battle cry for overhauling establishment Washington.

“We’re definitely taken aback. We were expecting it to be a very close race,” said Romanoff. “We’re overjoyed,” she added as her mother promised a month of partying all the way to the inauguration on January 20.

Theirs was not the only family in attendance. Other parents brought their children. One woman even cradled a new-born baby in a sling. All agreed one thing, that the country had voted for change and change was coming.

Supporters listed opposition to Obamacare, Trump’s promise to create jobs, defeat jihadists and fight corruption as reasons for his shock performance, together with years of struggle after the 2008 financial crash.

While the crowd was overwhelmingly white American, it was more diverse and smaller than often evident at Trump’s campaign rallies.

Supporters trashed the American media, which largely predicted a Clinton win, dismissing it as untrustworthy and biased in favor of the Democratic former secretary of state.

Accusations that Trump is racist were lies manufactured by Democrats, supporters said.

“Once it’s declared, once he reaches 270 we’re going to have a party like we’ve never seen before,” he promised, before breaking into USA chants with a young white man.

Women in plunging red gowns and delicate cocktail dresses pulled on red campaign trucker hats, turning the venue into a sea of red before a podium dressed in American flags, waiting for Trump to arrive.

It was a party for select supporters from across the country. There were long-time friends and associates, and a noticeable contingent from the Trump Organization or people working in Trump Tower.

Fifteen-year-old schoolboy Aidan Van Hoek from Bronxville New York may be too young to vote but said he was “loving every minute” as he celebrated with his mother and brother.

“Wild and that’s the way it should be!” he said.

It was a party for the so-called “silent majority” whom Trump supporters say felt ignored or misunderstood by the elite, and abandoned by the Obama administration and who distrusted Clinton.

“Fox News actually said it best, everyone knew they were going to vote for him, but were too scared to admit it,” said Van Hoek.

“The polls were wrong,” agreed James Davis, a 46-year-old African American pastor from Ohio wearing a suit and bow-tie.

“I think it’s primarily because of the stigma of being a Trump supporter and as a result there’s a huge underground that evolved out of nowhere,” he explained.

“This is a working class revolution in America,” said John Fredericks, a radio host and Virginia state chairman of the Trump campaign.

“They’re simply talking to the same other elite people in their wine and cheese and champagne echo chamber,” he said.