2 cops talked to Mayor Espinosa in jail cell before gunfire 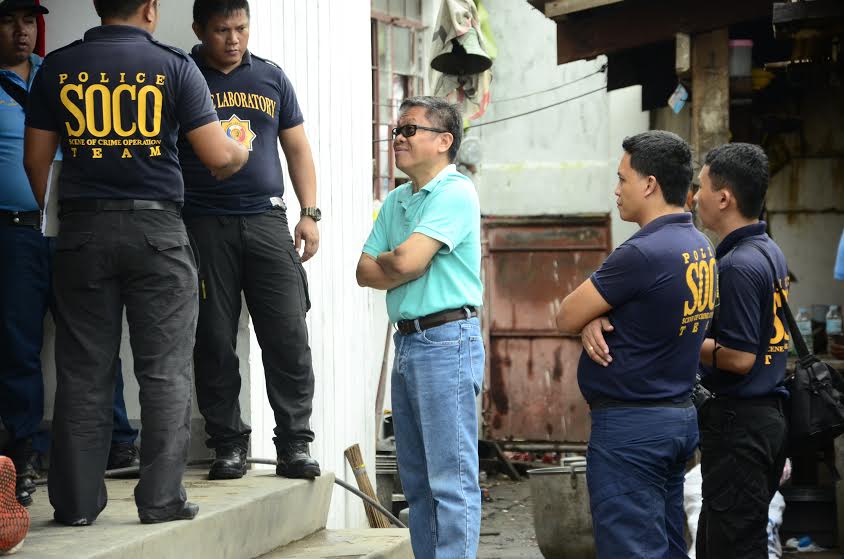 Members of the Scene of the Crime Operatives stand outside the jail cell of slain Albuera, Leyte Mayor Rolando Espinosa Sr. on Nov. 5, 2016, as they wait for further instructions. (PHOTO BY ROBERT DEJON/ INQUIRER VISAYAS)

PALO, Leyte — Minutes before Mayor Rolando Espinosa Sr. of Albuera town, Leyte, was killed, two members of the raiding team went inside his cell and talked to him.

Inmates in the adjacent cell were transferred to another cell.

Then shots were fired and Espinosa laid on the floor, bleeding.

The accounts were part of the initial findings of the Provincial Internal Affairs Service (PIAS) in Leyte that looked into the deaths of Espinosa and another jail inmate Raul Yap who were killed while in detention at the sub-provincial jail in Baybay City, Leyte.

Chief Supt. Elmer Beltejar, police director for Eastern Visayas, ordered the Regional Internal Affairs Service (RIAS) to investigate what happened after the PIAS report contradicted with the claim of the Criminal Investigation Group in Eastern Visayas (CIDG-8) that Espinosa fired at the raiding team when he was served the search warrant about 3 a.m. of Nov. 5.

The PIAS report stemmed from a moto propio investigation on the killing of Espinosa and Yap inside their cells at the sub-provincial jail in Barangay Hipusngo, Baybay City.

Based on the PIAS report, the CIDG-8 team led by Chief Insp. Leo D. Laraga arrived at the facility about 3:20 a.m. last Saturday.

When one of the jail guards was about to open the gate, the raiding team barged in and ordered them and the four provincial policemen tasked to secure Espinosa to kneel and face the wall.

They were also disarmed while the raiding team went to cells number 1 and 7 where Espinosa and Yap were detained.

The five co-inmates of Yap were told to transfer to another cell, leaving Yap alone with the policemen. They later heard gunshots.

Inmates in cell number 2 which was adjacent to the cell where Espinosa was detained, were told to transfer another cell.

They told the PIAS that they saw two armed men going inside Espinosa’s cell and talked to the mayor. Then they heard gunshots.

The provincial police told PIAS the Scene of the Crime Operatives (SOCO) team arrived at 7 a.m. but was only allowed to get inside the crime scene three hours later.

Provincial Jail Warden Homobono Bardillon also told investigators that their Network Video Recorder for their 16 channels of their CCTV and two unit switches were taken by the CIDG before they left the facility.

The death of Espinosa sowed fear among his family members who immediately asked for protection since they too might be killed. 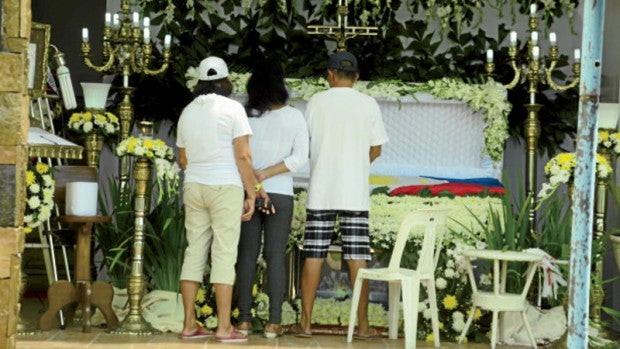 MAYOR’S WAKE Residents of Albuera town in Leyte province, pay their respects to their mayor, Rolando Espinosa Sr., who was killed under doubtful circumstances by police officers inside the Baybay jail. —ROBERT DEJON

Emma Espinosa, the wife of Mayor Espinosa’s older brother Ramon, said they have not seen even a single policeman nor a barangay tanod (village watchman) at the local chief executive’s wake at his house in Barangay Tinago, Albuera.

“We are scared. Who wouldn’t be?,” she told the Philippine Daily Inquirer over the phone on Tuesday.

“If mayor was killed inside the jail, it is not far that it will also happen to us who are outside,” she added.

Emma and her husband Ramon wanted Mayor Espinosa’s wake to be held in Cebu City where their family came from but said they still had to confer with the mayor’s immediate family.

Among Espinosa’s six siblings, only Ramon and the latter’s younger sister Janet have arrived in Leyte.

Emma said the date of internment has not been finalized since they are still waiting for the slain executive’s siblings from the United States to return to the Philippines on Nov. 20.

By then, the family is hoping that Kerwin Espinosa, Mayor Espinosa’s son and the suspected drug lord of Eastern Visayas, shall have been brought by the police back to the country.

“We will work things out as a family,” said Emma.

Chief Supt. Noli Taliño, director of the Police Regional Office in Central Visayas (PRO-7), said they would provide security to the Emma’s family in their return to Cebu.

“We just have to assess the situation. Even if they won’t have any request, we can provide them with security should the need arise,” he told reporters on Tuesday. SFM