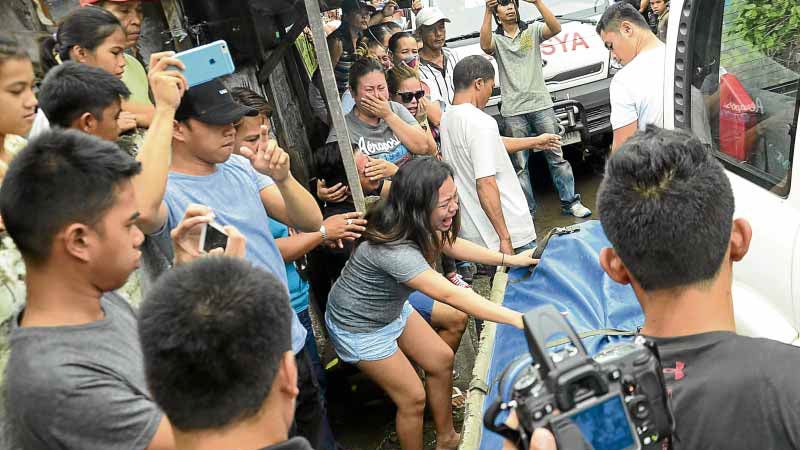 DEATH IN JAIL The youngest daughter of slain Mayor Rolando Espinosa, Chesney, wails upon seeing her father’s body as it was being brought out of the Baybay jail where hewas killed bymembers of the Criminal Investigation and Detection Group purportedly during a shootout. —ROBERT DEJON

ORMOC CITY—Mayor Rolando Espinosa Sr. had executed an affidavit linking 226 government, military, police and judicial personnel to the widespread illegal drug trade of his son Kerwin, and his murder inside a jail in Leyte province on Saturday morning could have a chilling effect on potential witnesses.

“It can instill fear among them. What is the guarantee that they are still safe?” said Chief Insp. Jove Espenido, police chief of Albuera, Espinosa’s hometown in Leyte and the center of his son Kerwin’s alleged drug trade.

Espenido said he had persuaded Espinosa to execute an affidavit and identify the government and police officials who provided protection to his son’s narcotics business, reputed to be the biggest in Eastern Visayas.

He said the mayor identified 226 people, including Sen. Leila de Lima and 18 other politicians, four members of the judiciary, 38 policemen, seven personnel of the Criminal Investigation and Detection Group (CIDG), one from the Philippine Drug Enforcement Agency, three from the Bureau of Jail Management and Penology, one from the Army and three from the media.

Separate complaints were later filed against 47 of the 226 people named in the Office of the Ombudsman, the prosecutors’ office and the Philippine National Police, according to Espenido. These included De Lima and six other government officials, 33 police officers and seven private individuals.

Senator De Lima has denied any involvement in illegal drugs, saying the charge is part of a demolition job against her by the Duterte administration.

Mayor Espinosa, 54, was a vital witness in all these cases, Espenido said. Kerwin Espinosa, 36, has been arrested in Abu Dhabi and is awaiting extradition to the Philippines.

In exchange for writing the affidavit, Espinosa had been told by Espenido that he would provide the mayor security by allowing him to stay in his police station.

On Oct. 5, Espinosa was transferred to a subprovincial jail in Baybay City to face charges of illegal possession of firearms and drugs.

Exactly a month after his transfer to the jail, Espinosa was killed in what CIDG-8 (Eastern Visayas) claimed was a shootout. A 15-member CIDG team barged into the jail at
3 a.m. on Saturday purportedly to serve a search warrant on Espinosa, whom they suspected to be keeping “shabu” (methamphetamine hydrochloride) inside his cell.

CIDG-8 claimed that Espinosa fired at the team, prompting them to fire back, hitting the mayor in the head, chest and stomach. Also killed in the raid was Raul Yap, a native of Albuera, who was also detained there on drug charges.

The raiding team reportedly recovered a .38 cal. pistol and a pack of shabu from the cell of Espinosa and a .45 cal. pistol, 27 sachets of marijuana and 21 sachets of shabu from Yap. Before they left, the policemen allegedly took the hard drive connected to the closed circuit television cameras.

A team from Camp Crame arrived on Sunday to start the investigation.

Espenido said he was surprised by the raid conducted by the CIDG on Espinosa who was killed for allegedly possessing a single firearm.

“We have conducted raids (against Espinosa) involving packs of shabu and cache of firearms. We did not harm or kill him. He eventually surrendered. But for a single firearm (he was killed)?”? Espenido said.

He told the Inquirer that he planned to visit the wake of Espinosa at his house in Barangay Tinago, Albuera.

Apology to the family

“I will apologize to his family. I really thought that he would be safe if he would be detained at the (Leyte subprovincial jail) but unfortunately, he was killed,”? Espenido said.

The Inquirer tried to reach Supt. Marvin Marcos, CIDG-8 chief, but he declined to be interviewed. Incidentally, Marcos’ aunt, Lalaine Jimenea, publisher of a local paper in Ormoc, was among those linked by Espinosa to his son’s operation.

Jimenea, who had denied the charges, was among the seven people charged at the regional state prosecutor’s office in Leyte for allegedly receiving payola from Kerwin.

Aside from Jimenea, the others charged by Espenido after they were linked by Espinosa were Senator De Lima, Vice Mayor Jonah John Ungab of Ronda town in Cebu, businessmen Eufrocino Codilla Jr. and Victor Espina Jr., brother of retired PNP officer in charge Leonardo Espina; and retired Bureau of Jail Management and Penology warden Joseph Nuñez who was warden of the Ormoc City jail where Kerwin Espinosa was previously detained.

According to Albert Hidalgo, former president of the Integrated Bar of the Philippines in Leyte, the affidavit executed by Espinosa lost its probative value with his death.

But he added the affidavit could be used to corroborate statements from other
witnesses.

Hidalgo said the danger of using the affidavit of Espinosa in court was that it would be open to questions by defense lawyers. “The affidavit will just be hearsay,” Hidalgo said.

Leilani Villarino, Espinosa’s lawyer, said the family had not decided whether to press charges against the CIDG. She said they would first wait for the outcome of the investigation before deciding on their next step.