BACOLOR, PAMPANGA— Cracks deep enough to fit a pen have appeared on a corner post of the lahar-buried San Guillermo Church here, indicating that its bell tower has started to detach from the main structure.

This explains why it has been tilting, a government engineer said after an inspection on Friday.

Recy Calma, a structural engineer, recommended regular ground surveys of the belfry to determine the extent and pace by which it is leaning toward the rectory.

But Calma said she did not find other worrisome signs of structural weaknesses inside the bell tower. Two of its bells —one dated 1843, the other, 1898—have been taken down. Two larger bells are still hanging and are rung either manually or electronically.

Danilo Reyes, a resident, recalled that the baptistry used to be at the first tier of the bell tower, a sign that it used to be hollow before a series of lahar flows (the worst on Oct. 1, 1995) filled it up.

Calma said the tilting may have occurred due to waves of thick lahar or volcanic debris which were washed down from the slopes of Mt. Pinatubo after it erupted in 1991. The sand that lahar carried was not a stable material, she said.

Calma saw many cracks on what remained of the original walls, which were made of clay bricks and held together by paste-like mortar. The cracks have expanded to more than 5 mm wide.

She suggested holding the walls together by sandwiching them with mesh wires or by grouting the cracks to prevent the partial or total collapse of the walls, in the event an earthquake hits. 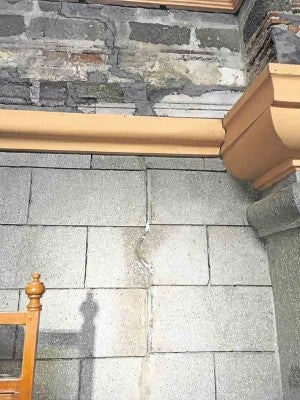 Held together by a paste-like mortar, this wall of clay bricks shows cracks on what remained of the San Guillermo Church 25 years after it bore the brunt of Mt. Pinatubo’s 1991 eruptions and lahar flows. —TONETTE T. OREJAS

Asked if the condition of the bell tower and the church warrants its closure, Calma said the Department of Public Works and Highways (DPWH) needs to carry out a full study to make any recommendation.

Fr. Manuel Sta. Maria, the parish priest, said he would consider closing the church if public safety was threatened and after consultations with San Fernando Archbishop Florentino Lavarias.

San Guillermo Church is the most visible and cruel reminder of Mt. Pinatubo’s wrath in Pampanga. The blasts dispersed Bacolor residents to eight resettlement areas.

Another option being considered here is to build a replica of the bell tower and church behind the original structures. The Bacolor church ground spans 10 hectares, part of which is occupied by a cemetery where the dead have been buried twice over.

Sta. Maria said the options will be discussed with the parishioners.

The tilting problem surfaced as the San Guillermo Church turns 440 years old next month. It is the fifth oldest church in Pampanga after those in Lubao and Betis (1572), and Macabebe and Candaba (1575).

The church had survived many disasters, aside from Mt. Pinatubo’s 1991 blasts, which were the world’s second worst in the 20th century after Mt. Novarupta in Alaska.

While Bacolor was nearly erased from the map by the eruption and lahar flows that followed, the province of Pampanga found a new source of income in the volcanic materials left by Mt. Pinatubo.