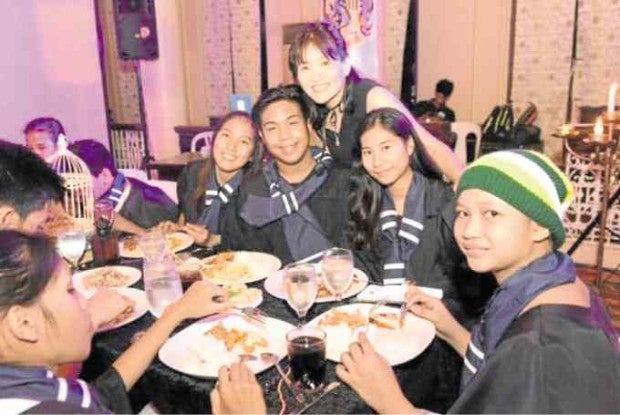 FEAST AND FANTASY Sharing a meal with Harry Potter characters

BACOLOD CITY—Even for just a couple of hours, 47 children forgot their battle with cancer and other life-threatening diseases.

Instead, they basked in the fun of being at the Great Hall of Hogwarts Castle with their favorite wizard, Harry Potter.

The  Suntown Camp Foundation volunteers and camp leaders  transformed the Social Hall of the Negros Occidental Capitol in Bacolod City into a magical world of Potter and other characters in the well-loved novels of author J. K. Rowling.

The children were also treated to loot bags with Harry Potter-like sweets, with M&Ms substituting for Bertie Bott’s Every Flavour Beans, for added fun.

Last Oct. 29, the children, many wearing surgical masks and some on crutches, were ushered  into the Great Hall by Millie Kilayko, who was dressed as Professor Minerva McGonagall.

They were all welcomed by Roy Hojilla, who was in character as Hogwarts headmaster Professor Albus  Dumbledore.

The children were then introduced to  the heads of the various houses of Hogwarts—McGonagall for Gryffindor, Tima Lacson as Pomona Sprout for Hufflepuff, William Weber as Filius Flitwick for Ravenclaw and Chito Villanueva as Severus Snape for Slytherin.

A sorting hat then assigned the children to the four different houses.

Nelson Co, who played the role of Harry Potter, and friends  presented a skit.

There was also a dance of the Dementors with Lord Voldemort who was played by Edward Manganti, a Patronus dance and snitch hunting.

Dr. Alvin Parreno, Suntown vice president, also hosted a variety show that included skits,  and song and dance numbers from the children  and the camp leaders, with lively performances from Japanese Mikiko Fukkai and Yuta Murase.

By tradition, the annual Suntown Camp is  capped by a gala night where volunteers, leaders and all those behind the scene come as characters from a chosen theme to perform for the children, said Kilayko, Suntown president.

“They do not hesitate  to make fun of themselves and  look silly, all for the sake of the children,” she said.

During the annual five-day camp, various activities  are held to help the children  understand their  situation and others, in a fun and loving setting, she added.

This year, Suntown had 47 in-house campers at CICM-Maryshore in Talisay City and 15 toddlers for the day camp.

Most of the children come from impoverished families with few opportunities to have fun because of financial constraints brought about by their medical needs,  Kilayko said.

Many of the children live from house to hospital,  and some have had to quit school.

Kilayko said Suntown Camp  does not exist to address medical needs. It is held to provide the children  with the time of their lives.

She noted that the number of cancer kids are increasing every year.

Also among the volunteers are members of Assumption College Class of ’65 who sponsored the gala night and prepared gifts for the children, Kilayko said.

“We want the children to feel that every moment is special and they should never ever feel that they are not loved,” Kilayko said.

As for the Suntown volunteers and leaders, she said:  “We are receiving more than giving. The relationship we develop with the children actually   gives us more fulfillment, a lot more than we give them.”?

Suntown Camp ended with a Mass, where the priest asked the children  to come forward to say the Lord’s Prayer with him.

Before he blessed those present, he asked the children to come forward again and bless him first.

After the Mass, the  campers “graduated” in the presence of their families and took their turn in performing for the ones who made the 10th Suntown Camp possible.