The Undecideds: They're out there, and so very conflicted | Inquirer News
Close
menu
search

The Undecideds: They’re out there, and so very conflicted 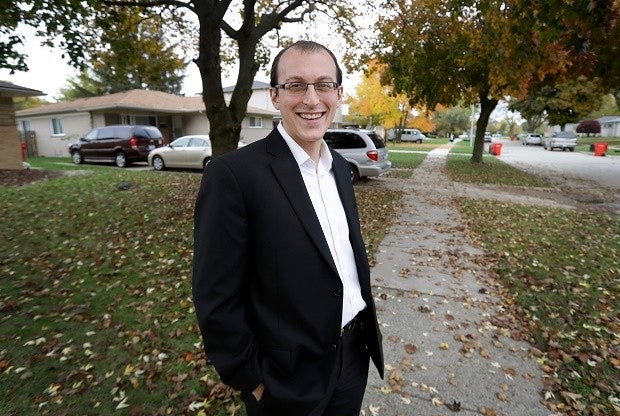 In this photo taken Nov. 3, 2016, Moshe Sherizen, an undecided voter, is shown outside his home in Southfield, Mich. After all the sound, fury, fact, fallacy, bluster and blarney of the 2016 presidential campaign, there still are undecided voters out there. Really. And they’re not just people who’ve buried their heads in the sand. Some thoughtful people just do not know what to do with the choices they’ve been given, yet are determined to exercise their right to vote. AP

WASHINGTON — After all the sound, fury, fact, fallacy, bluster and blarney of the 2016 presidential campaign, there still are undecided voters out there.

And they’re not just people who’ve buried their heads in the sand.

Some thoughtful people just do not know what to do with the choices they’ve been given, yet are determined to exercise their right to vote.

“I have a mail-in ballot and I change my mind every day about what I should do,” says Lori Perez, a stay-at-home mom in Lehi, Utah.

“Let me have a moment of silence to think about this, OK?” asks Moshe Sherizen, a digital marketer from Southfield, Michigan.

Polls suggest the undecideds make up a small slice of the electorate — perhaps just 2 percent at this late date.

The campaigns have largely them written off, placing their emphasis instead on boosting turnout among the much larger bloc of voters they’ve already identified as supporters.

But in a close race, the undecideds still could be decisive, especially since pollsters say they’re more likely to cast ballots if they live in competitive states than in noncompetitive ones.

Spend some time talking to undecided voters and a clear theme of dissatisfaction quickly emerges.

Texan Danielle Inman, who works for a cellular provider, shows the conflicting emotions that are roiling undecided voters, who can talk themselves in and out of multiple candidates in a single conversation.

In a 10-minute chat, the 47-year-old single mother from Plano says Republican Donald Trump and Democrat Hillary Clinton would “screw things up equally — just in different ways.” She says there’s “no way in hell” she’d vote for Trump. She says the third-party candidates don’t have a chance of winning, so she’ll definitely pick a major-party candidate. That leaves Clinton. But she’s not sure she can vote for her. And maybe she can vote third-party after all.

So she’ll be “praying very heavily on my drive to my polling place” for the right answer.

Pennsylvania millennial Schroeder says he’s been to a Trump rally but has gotten most of his information about the campaign from friends and family who depict the Republican as a “dirty, nasty scathing type of person” and Clinton as “a hero who is straight as an arrow.” But he’s also heard people criticize Clinton’s secret email server and call her a “felon.”

“While I’d love to see a woman in the White House, I don’t agree with the policies,” she says of Clinton. Keehn feels a tug to vote for a third-party candidate but “the fear is that if you don’t vote for Clinton, you’re just giving a vote to Trump. But I do feel like if we do that forever, we’ll never have the opportunity to have a third-party voice.”

The undecideds make up such a small portion of the electorate that it’s hard to get a fix on where they’re coming from politically.

But Republican pollster Micah Roberts analyzed data on a sizeable chunk of undecided voters in early October and found them to be leaning heavily Republican. Some of them may be gravitating to the GOP nominee in the campaign’s final days, he says.

“You’re seeing that juice getting injected into the Trump side,” says Roberts.

Sherizen, 32, might — or might not — fall into that category. He considers himself a Democrat but also a risk-taker and likes Trump’s pledge of tough immigration policies to keep out potential terrorists.

“So I’m sort of inclined to vote for Trump,” he says.

“But then I picture myself driving to vote and I’m like, ‘Really? No, I’ll vote for Hillary.'”

New York comedian Dan Nainan, too, likes Trump’s tough talk about limiting the influx of refugees to combat terrorism. But Nainan, a 35-year-old independent, sees Trump as unpredictable, doesn’t like Clinton’s tax policies, and thinks a vote for a third-party candidate “is like not voting.”

“I wish Michael Bloomberg had run,” he laments.

Perez, the mom from Utah, says she typically votes Republican but thought about just not voting this year. She likes many of Trump’s policies, but doesn’t think he’s trustworthy or presidential. Clinton, she says, is too liberal and connected to too many scandals. Then there’s independent candidate Evan McMullin, who she says offers the idea of a new conservative movement but can’t win outright.

“We are stuck between a rock and hard place,” Perez wrote on Facebook. “This election sucks!!!”