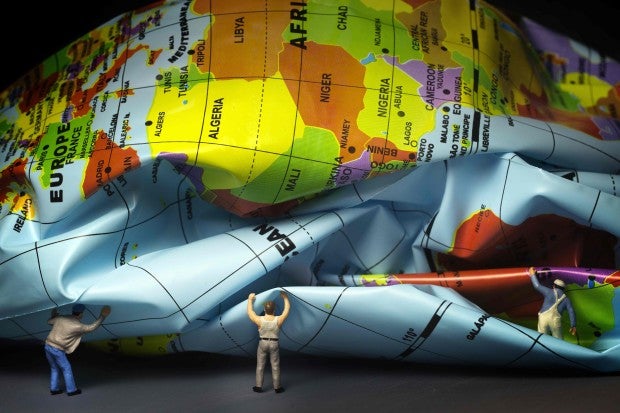 This file photo, taken in Paris last year, of figurines trying to prop up a deflated globe, illustrates the task that lies ahead of the more than 190 countries convened for the annual UN climate talks in Marrakech, Morocco. —AFP

The United Nations said this is a landmark that signals the beginning of a new chapter for humankind and demonstrates that countries are serious about addressing global warming.

“This is a moment to celebrate,” said United Nations climate chief Patricia Espinosa. “It is also a moment to look ahead with sober assessment and renewed will over the task ahead.”

The Paris Agreement seeks to wean the world economy off fossil fuels in the second half of the century, limiting the rise in average world temperatures to “well below” 2 degrees Celsius (3.6 Fahrenheit) above preindustrial times.

It takes effect as greenhouse gas emissions are projected by 2030 to exceed what is needed by 12 billion to 14 billion tonnes to keep global warming to the internationally agreed target, the United Nations said this week.

So far, 196 countries, accounting for just over two thirds of the world’s greenhouse gas emissions, have formally joined the accord. Many more countries are expected to come aboard the coming weeks and months.

UN spokesperson Stéphane Dujarric said Secretary General Ban Ki-moon plans to commemorate “this historic day for both the people and the planet” by holding a conversation on Friday with civil society organizations about how they can contribute to the objectives of the Paris agreement.

Representatives from 196 countries on Monday will convene in Marrakech, Morocco, for two weeks to discuss the nuts and bolts of the Paris accord and the policies, technology and finance needed to ensure the Paris goals are achieved.

“The timetable is pressing because globally greenhouse gas emissions which drive climate change and its impacts are not yet falling—a fact which the Marrakech meeting must have at the front of its concerns and collective resolve,” said Espinosa.

“Donor countries made a strong commitment in Paris. And now we must turn those commitments into action,” he said. —REPORTS FROM REUTERS AND AP