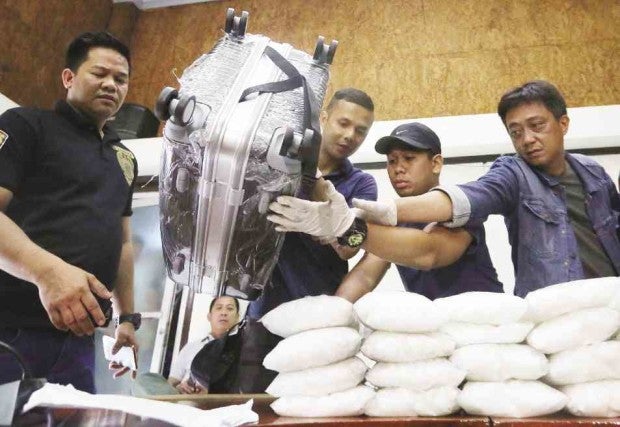 BAGGED. Antidrug agents present the 20 kilos of “shabu” found in the suitcase seized from two suspects arrested in Manila on Friday. —MARIANNE BERMUDEZ

Two alleged drug traffickers carrying “shabu” worth P100 million were arrested in Manila on Friday morning and were being linked to the killing of two other suspects.

Gasingan and Rodriguez were arrested in a buy-bust operation on Tambacan Street, Binondo, around 4:30 a.m., after selling 100 grams of suspected shabu to a poseur buyer. The drug sting was launched by members of the Manila Police District’s Station 11 and the Philippine Drug Enforcement Agency.

Seized from the duo was a suitcase containing 20 kilos of the drug, packed in 20 plastic bags, Albayalde said in a media briefing at the MPD headquarters. They also allegedly yielded a loaded .45-caliber pistol.

“The drugs were covered in foil and carbon paper. It’s as if they wanted to conceal this from X-ray (machines). It could be either imported or intended for export,” the NCRPO chief noted.

“We believe (those killed) was part of their drug distribution network,’’ Coronel said. “The motive was nonremittance of proceeds (from the sale of drugs).”

Albayalde said the suspects were placed under surveillance for four months prior to Friday’s operation. A manhunt is ongoing against a third suspect, a Chinese national, who worked with Garcia and Rodriguez, he added.