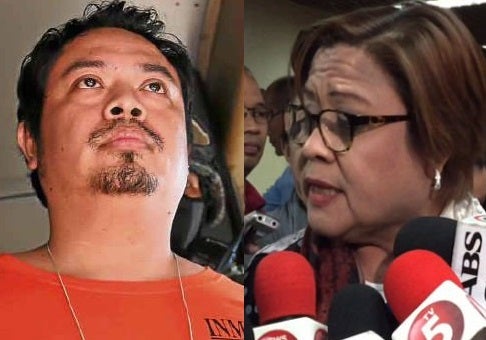 Sen. Leila de Lima on Friday said inmate Jaybee Sebastian was  forced to file charges against her as part of the administration’s scheme to pin her for drug allegations she has several times denied.

Kidnap and drug convict Sebastian filed graft charges against De Lima at the Department of Justice Friday afternoon weeks after he appeared at a House justice committee inquiry where he accused the former justice chief of taking drug money from the illicit drug trade inside the New Bilibid Prisons.

“I believe that, just like his appearance at the House inquiry, Sebastian has been coerced to file that so-called complaint. It’s a matter of life and death for him. He’s just fulfilling his part of the bargain with the evil forces so they don’t touch him,” said De Lima.

De Lima noted how the case was filed at the DOJ, headed by her chief inquisitor Justice Secretary Vitaliano Aguirre II, instead of the Office of the Ombudsman, where graft charges against elected officials are usually filed.

“The administration is just using its homecourt advantage, which they do not have if the complaint is filed with the Ombudsman. It’s all part of their insidious scheme and sinister agenda to railroad the outcome of those cases,” De Lima said./rga

Read Next
JV Ejercito to go on ‘forced vacation’
EDITORS' PICK
House energy committee chair Arroyo bats for cheap electricity
Why Tagle is a leading papal contender
Powered by style, innovation and passion
In Borongan, nuns play hoops (not mahjong)
PH resumes talks with China on Chinese-funded transport projects
A laptop that maximizes your WiFi so you can maximize your productivity
MOST READ
Imee Marcos bares illegal importation of white onions
Why Tagle is a leading papal contender
Zubiri on SRA mess: Shameful, disgusting
Ogie Alcasid positive for COVID-19: ‘We keep ourselves protected and yet inabot din’
Don't miss out on the latest news and information.