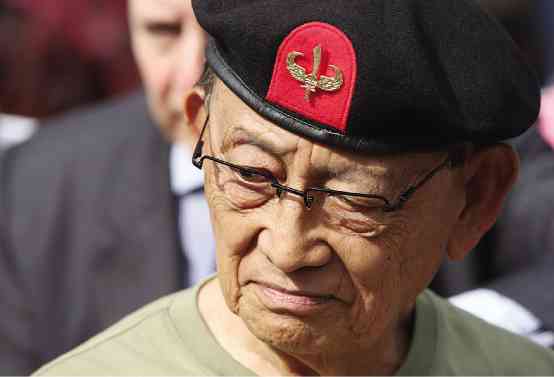 DAVAO CITY—President  Duterte has accepted Fidel V. Ramos’ (FVR) resignation as a special envoy to China, but said the 88-year-old former president would continue to have his ear despite their differences.

Speaking to reporters during a visit to the grave of his parents Tuesday, Mr. Duterte thanked Ramos for effectively bridging Manila and Beijing together following a festering territorial row in the South China Sea.

“I’d like to thank him for helping me and being of service to this nation even at his age,” the President said.

Mr. Duterte said he had taken Ramos’ advise on many issues, but stressed the two of them differed in their approach.

“I have my own way of assessing it,” he added.

READ: Duterte to FVR: Thank you but I must do it my way

President Duterte said he had not heard Ramos attribute extrajudicial killings to his government, but he said he read about it in one of the newspapers.

“He knows that I do not do it and we do not do it. He was once upon a time the chief for PNP and he did not do it. So I think it’s off-tangent,” he said.

However, he denied that there was any tension between their relationship.

“I will still consult with (him) in the future. Yes, of course, if he cares to listen. It doesn’t mean I can not consult him anymore because he resigned as a special envoy,” President Duterte said.

He acknowledged that there were killings, but these should not all be blamed on the police.

The criticisms would not stop him from pursuing the antidrug campaign “until the last pusher is exterminated,” the President said.

He said he understood Ramos’ concern on the Paris Climate Change treaty, but added that what he opposed was the “nonbinding treaty.”

In recent opinion pieces, Ramos had hit out at the government, calling its inaction on the treaty as “obviously wrong and full of s**t.”

Ramos had also questioned Mr. Duterte’s penchant of cursing the west, including US President Barack Obama, the United Nations and the European Union for questioning his antidrugs crackdown, and said his first 100 days in office was a “huge disappointment and letdown.”

But President Duterte on Tuesday dismissed Ramos’ lament as a “product of western education.”

READ: Duterte on Ramos: He’s a graduate of West Point, I am just a local boy

“He’s graduate of West Point. Me? I am just a local boy,” Duterte said, adding that he was also not a military man but “just a mayor.”

President Duterte said his critics were blaming police for all the killings, even those that were attributed to unknown vigilantes.

He said the United States and the European Union treated Filipinos “like a dog” throwing morsels of bread far from its reach, by threatening to freeze all humanitarian aid and other assistance to the country unless the killings stopped.

Opposition lawmakers said on Wednesday it was “too early to tell” whether Ramos would join their ranks.

“I think he is styling himself as an elder statesman with a critical word or two to say about an administration that he still hopes would succeed,” said Rep. Teddy Baguilat, a leader of an independent minority bloc in the House of Representatives.

But Baguilat said that the Duterte administration shouldn’t be too threatened.

“The former president no longer has considerable political clout these days. So the break shouldn’t worry [Mr. Duterte] in terms of schisms within his vaunted coalition,” he said.

Kabayan Rep. Harry Roque, a member of the official minority bloc, also said he did not see Ramos, the Philippines’ most senior ex-president, emerging as an opposition figure.

“[I see] no ramifications since FVR’s mission has been accomplished with the ice having been broken [with China],” Roque said. “I do hope [Mr. Duterte] listens to the wisdom of FVR on issues.”

But Baguilat said Ramos’ split with the administration was an important development and an “indictment” of Mr. Duterte’s foreign policy pronouncement. —WITH A REPORT FROM DJ YAP IN MANILA