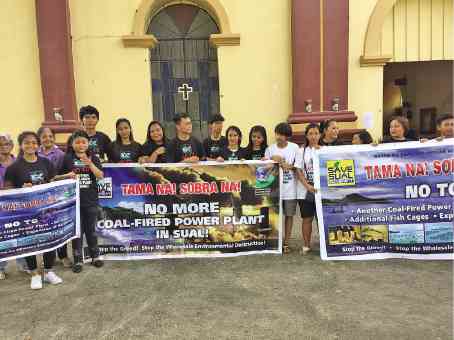 Residents opposed to the construction of another power plant in Sual town in Pangasinan province regroup in front of the church to dramatize their protest against the project. They had wanted to submit a manifesto to President Duterte during a rally but were stopped by police. —GABRIEL CARDINOZA

SUAL, PANGASINAN—Residents protesting the construction of another coal-fired power plant here on Wednesday were stopped by the police before they could stage a rally in time for the arrival of President Duterte.

Rosanna Marie Soriano, chair of Save Sual Movement, said policemen seized their placards and streamers as they walked toward the entrance of the Sual wharf here, where Mr. Duterte was to hold the ceremonial send-off of 17 Vietnamese fishermen, who were caught in the waters off Ilocos Sur province on Sept. 8.

Soriano, who was with 30 other protesters, said a policeman first approached and told her that his superior officer, who was on the other side of the road, wanted to talk to her. When she crossed the highway here, Soriano said other policemen seized their streamers and placards.

“Our streamers and placards were still folded at that time. They also searched the bag of one of my companions,” she said. Soriano said she was told by a police officer that they could not stage the rally.

She said the protest action was not directed against Mr. Duterte.

“This is for the environment. In fact, we want to meet the President and give him our manifesto,” she said.

In a manifesto, the residents said the 1,600-MW plant—the country’s largest coal-fired power plant—owned by Team Energy at Barangay Pangascasan here is enough. The plant is just a few kilometers from the proposed site of the new plant.

Last month, Soriano’s group launched a signature campaign to stop the construction of the new plant. Soriano said residents are fearful of coal’s effects on health and the environment.

She also said Mayor Roberto Arcinue never consulted them about the new plant. But Arcinue said he conducted six public hearings and that no one objected.

During a program attended by Mr. Duterte, Arcinue acknowledged signing a memorandum of agreement with Phinma, “so that electricity we supply to the Luzon grid will become 2,018 MW” when added to the Team Energy’s production.

“To protect and preserve our environment in Sual, I have an agreement with San Miguel Energy Corp. and the Philippine Coconut Authority to plant 1 million trees in Sual,” he said.

“I also signed a memorandum of agreement with [the Department of Environment and Natural Resources] this year to plant 150,000 trees and we have planted 100,000 trees already,” he said. —GABRIEL CARDINOZA