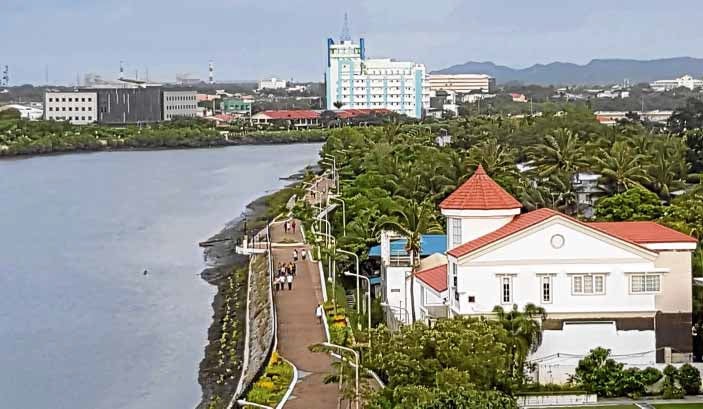 HOUSE WITH A VIEW The controversial house of Iloilo City Mayor Jed Patrick Mabilog on the bank of the scenic Iloilo River is being investigated by the Ombudsman. —NESTOR P. BURGOS JR.

ILOILO CITY—Promenaders would hardly miss the so-called White House on the edge of the scenic Iloilo River Esplanade, now the object of scrutiny by investigators looking at the assets of its owner, Iloilo City Mayor Jed Patrick Mabilog, who has been accused of involvement in the illegal drug trade.

The three-story structure at Barangay Tap-oc in Molo District lies along the kilometer-long prime recreational area for walking, jogging, open-air dining and venue for water sports.

Photos of the White House have gone viral online since President Duterte identified Mabilog as among the officials allegedly involved in illegal drugs.

The mayor has repeatedly denied the allegation. But his inclusion on the drug list has heightened curiosity and focus on the source of his wealth and assets.

Mejorada, a longtime critic of Mabilog, claimed that the cost of the house could reach P50 million based on its size and features.

On Oct. 25, the mayor and his wife, Marivic, opened their house for the first time to reporters.

Marivic said the house, constructed over three years, cost P7.9 million. It is among the properties declared in Mabilog’s 2015 statement of assets, liabilities and net worth (SALN).

“We wanted you to see for yourself and know the truth,” Marivic said.

She said she and her husband earlier ignored negative posts on social media about their house “because we know and are comfortable with the truth.”

But they decided to invite reporters after relatives abroad told them about the viral social media posts.

The house sits on a 200-square-meter lot within the family compound. The first floor is an open hall with its back wall facing the river and adjacent to the promenade.

The master bedroom, living area and kitchen are on the second floor, which opens to two terraces, one facing the river. The third floor has two bedrooms with a common bathroom for their 21-year-old daughter and 8-year-old son.

“We only have a P10-million view,” Marivic said in belying allegations on the cost of the house.

Mabilog has insisted that his assets were accumulated from his earnings as a businessman and that of Marivic, who was employed for 21 years, rising to become vice president for finance and comptroller of Terracom Geotechnique, a geodetic engineering firm based in Calgary, Canada. She retired in December 2014.

“We saved for this house and this is among the fruits of our labor,” Marivic said.

But Mejorada alleged that the house cost much more than what Mabilog had declared and beyond the means of the couple.

Citing data from a tax declaration covering the property, Mejorada said the house had a floor area of 555.51 square meters with a market value of P5,551,070 and assessed value of P2,775,540.

But he said the construction costs,  including those for mechanical and electrical fixtures, could be P35 million.

The estimated cost of a detached high-end house ranges from P53,900 per sqm to P63,150 per sqm, he said, citing Construction Cost Handbook for the Philippines (2015).

He said the cost could be higher, claiming that the glass windows were supplied by Kenneth & Mock, which specializes in top-of-the-line windows and doors.

The installation cost of the glass windows is estimated to be between P5 million and P7 million, he said.

Mejorada served as campaign manager and spokesperson of businessman Rommel Ynion whom Mabilog defeated in the 2013 mayoral election.

Mabilog has said his increased net worth was a result of business earnings as marketing director of Airtropolis Philippines, a custom brokerage firm, and interests in Pan Pacific Food Services.