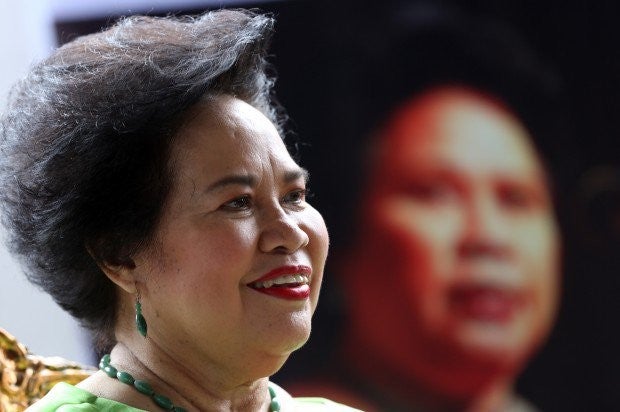 Even in death, the feisty senator known for her wit, legal acumen and fiery temper over government shenanigans still “sees red.” Or yellow.

Since her interment on Oct. 2, the late Sen. Miriam Defensor Santiago has been receiving three fresh roses daily from her widower, Narciso “Jun” Santiago Jr., who has been visiting her tomb at Loyola Memorial Park in Marikina City every day without fail.

The roses—often red, sometimes yellow—are procured each morning from one flower shop by Charry Bicaldo, who has been working as a houseboy for the Santiagos for the last nine years and now serves as the tomb’s caretaker.

Jun, Miriam’s husband of 45 years who had also held various government positions, usually arrives around noon, Bicaldo said when the Inquirer saw him Monday morning as crowds started streaming into Loyola a day before All Saints’ Day.

He said Jun still cuts a downcast, solitary figure whenever he stands before the white tomb that bears the remains of Miriam, who died of lung cancer on Sept. 29. (She was laid to rest next to their son Alexander Robert, who died in 2003.)

“He cries and embraces the tomb. Seeing him like that moves me to tears, too,” Bicaldo said of the widower.

The 31-year-old Bicaldo said it’s his job now to watch over the late senator. He goes to the memorial park every day on a motorbike and stays at the gravesite till early evening, keeping it clean and the flowers fresh.

“It’s already a routine. My work is to take care of Senator Santiago. She took good care of us (employees) when she was still alive. She treated us fairly; she loved us and even gave us advice about the value of hard work. Now I’m doing this for her,” Bicaldo said.

On Sunday alone, around 200 people visited the tomb, all saying they were missing her, especially her so-called “pickup lines” that helped endear her to the youth and made her a sought-after campus speaker.

When Jun is not around, Bicaldo often finds himself entertaining the visitors, answering any question about the senator if he could.

“Was she really mataray (combative) in person?” goes one of the most frequently asked questions. Bicoldo’s quick reply: “Super bait (very kind).”

“I really wish she would ‘visit’ me now so that I’ll know if she’s happy with what I’m doing. Because I’m really happy to be doing this for her, to be serving her, without asking for anything in return,” he added.