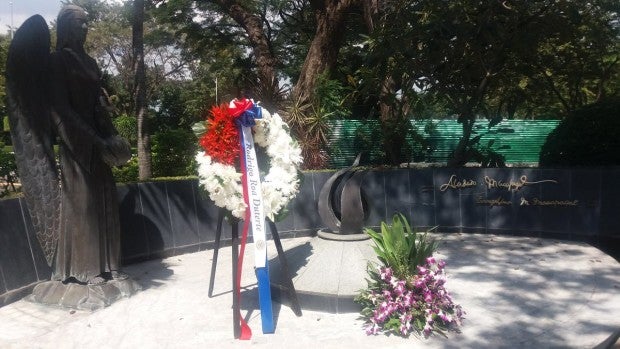 A wreath sent by President Duterte to the tomb of former President Diosdado Macapagal at the Libingan ng mga Bayani on All Saints’ Day. (Photo by ERIKA SAULER/ INQUIRER)

MANILA — President Duterte paid respects to his late predecessors on the eve of All Saints Day by sending flowers to their tombs.

Wreaths of white and red flowers were laid out at the tombs of of former Presidents Carlos P. Garcia, Elpidio Quirino and Diosdado Macapagal at the Libingan ng mga Bayani in Taguig City,

“Rodrigo Roa Duterte” was written on the white ribbon along with the President’s seal. (There were also reports and photos of wreaths sent by Duterte to the tombs of former President Corazon Aquino and her husband, former Senator Benigno Aquino Jr. at the Manila Memorial Park).

Wreaths from the President were also seen at the tombs of late Presidents Ramon Magsaysay and Sergio Osmeña at the Manila North Cemetery.

Beside the former Presidents’ tombs at Section A was an area enclosed by green iron sheets, the proposed gravesite for the late strongman Ferdinand Marcos.

While there were no flowers around this plot, a concrete doorway has been recently added, apparently a feature of his tomb built before preparations were halted by the Supreme Court hearing several petitions against a hero’s burial for Marcos.

Suficiencia said there had been no protesters or visitors to the site since the Supreme Court issued the status quo ante order on the Marcos burial.