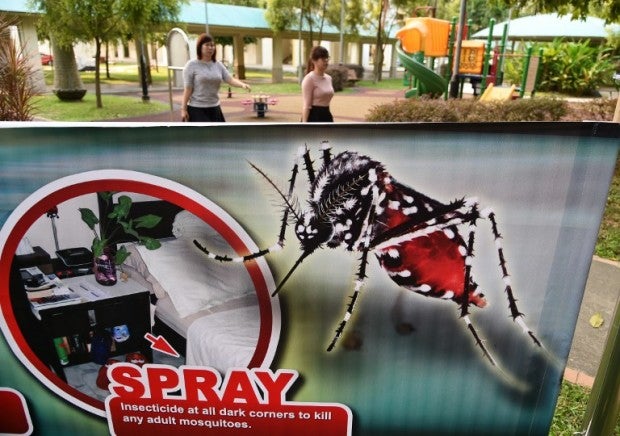 Residents walk to work past a public service announcement banner against the spread of Aedes mosquitoes, a carrier for the Zika virus, at a residential block at Aljunied Crescent neighborhood in Singapore on August 29, 2016. Singapore on August 28 confirmed 41 locally transmitted cases of the Zika virus, which can cause deformities in unborn babies, and said more infections are likely.  In the Philippines, the Department of Health has monitored a dozen cases of the Zika virus as of September 2016. AFP FILE PHOTO

MANILA — The Department of Health (DOH) issued new guidelines recommending that blood to be given to pregnant women be screened for the mosquito-borne Zika virus, which has been linked to severe fetal brain defects.

Health Undersecretary Gerardo Bayugo said that while the main mode of transmission of the virus has been through the bite of an infected mosquito, confirmed cases abroad showed that the disease could be
transferred through sexual contact and blood transfusion. An infected pregnant mother can also transmit the virus to her unborn baby.

Bayugo said the screening of blood for transfusion in pregnant women was recommended in lieu of general Zika screening of all blood donations.

“Testing all blood donors will not be economically feasible for us to do. It will be a logistical nightmare because there are so many blood donations. It will not be practical to do that,” said Bayugo during the first National Summit on Zika Virus held on Friday in Pasay City.

In a separate interview, Bayugo said screening per blood unit or donor would cost around P6,000.

“So the latest instruction is that testing for Zika virus will be conducted only in blood donations that will be transferred to pregnant mothers requiring blood transfusion,” said the health official.

“The testing we have now is quite fast and there are also other subnational laboratories that can do the testing, not only the Research Institute for Tropical Medicine (RITM),” he told the Philippine Daily Inquirer.

He said the DOH was updating its guidelines as new information came in. “This is a new disease and even the World Health Organization admitted that there are a lot of things we don’t know about it but we are adjusting our guidelines as we gather more information,” he said.

While the virus is considered a mild disease, infection during pregnancy can cause serious birth defects. Zika has been linked specifically to microcephaly, a neurological birth disorder wherein the baby’s head is smaller than normal and as a result, the baby will suffer physical and mental developmental defects.  SFM/rga