A poem, a placard, a phantom | Inquirer News

A poem, a placard, a phantom 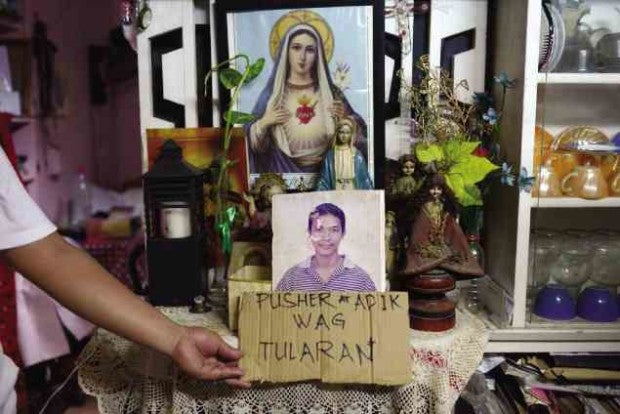 After Florjohn Cruz was killed in a police operation that ended right inside his house, his grieving family found a cardboard sign calling him “a pusher and an addict” near the spot where he was shot dead. —ELOISA LOPEZ

Do you believe in premonitions?” Rita asked as she took out a piece of paper.

It contained a handwritten poem by her estranged husband, Florjohn Cruz.

“Today the truth faces me again / The people I fought for turned their backs on me, rejected and criticized me / But they don’t realize the situation I am in, how I’m struggling,” read the opening verses of Cruz’s six-stanza piece, which he wrote on Oct. 17.

“What I wanted is redemption / Still, I’m getting rejection. / Seems the odds are against me. Even the luck, chance, and weather.”

It no longer surprised his loved ones to find Cruz musing in pain about his life. The 34-year-old father of three once brimmed with talent—he used to be a singer-musician, a field hockey player, and a “dean’s lister” in a computer school—before he got hooked on drugs.

What left them shocked and deeply scarred was the way they lost him. Two days after he wrote the poem, Cruz was killed in what the police called a “legitimate operation” targeting alleged drug pushers in his Grace Park neighborhood in Caloocan City.

According to the official report by the Caloocan police, a team led by SPO3 Venencio Santiago had Cruz and two other suspects trapped in a “buy-bust” operation on A. Baltazar Street around 10 p.m. on Oct. 19.

“Suspect Cruz ran inside the house then pulled a firearm and successively shot the lawmen prompting the same to return fire in order to prevent and repel Cruz’s unlawful aggression. As a result, Cruz was gunned down while the other suspects (his girlfriend Susan Batac and Fitzgerald Tan) were immediately apprehended for violations of Republic Act 9165,” said the two-page report seen by the Inquirer.

Like most casualties in President Duterte’s four-month-old war on drugs, Cruz was recorded as a suspect who resisted arrest and tried to fight back with a .38-cal. pistol.

Both Cruz’s widow Rita and his mother Policarpia insisted that though he used drugs, he was never a pusher. Neither was he a gun owner nor a troublemaker in the community.

Hence, when the Inquirer met them last week, the two women were not only grieving. They felt insulted and violated—not just by the way the police dealt with Florjohn but by the way they apparently toyed with their minds after having him killed.

If Cruz’s killing was counted as a legitimate police operation, how come his family members and neighbors found “a piece of cardboard” at the living room, near the spot where he was shot?

They said they found the brown cardboard as they were cleaning the bloodstained section of the floor near the altar. Written on the cardboard was the message: “Pusher at Adik Wag Tularan (Don’t be a pusher and an addict like him).”

“The police said they killed him. But isn’t [a cardboard like that] a trademark of people who carry out summary executions?” said one of Cruz’s close friends.

No one in the family actually witnessed the shooting, but Policarpia said she was in the house with her son when “armed men” suddenly entered that night.

Cruz, she recalled, was fixing her radio when the intruders barged in and ordered her to “Get out! Get out!”. She did as she was told, thinking her son would follow.

The last time Policarpia saw her son, he was being slapped in the face. Moments later, as she ran away from the house, gunshots rang out.

When she returned, Cruz was already in a body bag being carried by funeral home workers.

Papa in the garden

Meanwhile, Rita, who lives in a nearby house with the three daughters she had with Cruz, learned about his death through a phone call from a friend. Their daughters were then listening and easily sensed that something bad happened because of their mother’s high-pitched voice.

Rita rushed to Policarpia’s house but was made to wait behind the yellow police line for hours. She returned to her own house around 1 a.m., confirming the grim news to her eldest daughter by running a finger across her neck, making an imaginary slit.

The 12-year-old girl didn’t say a word, buried herself under a blanket, then wailed.

“Then my daughter told me: ‘After you left (to go to Policarpia’s house), I saw Papa in the garden. He was smiling at me, waving goodbye.”

The following day, Rita said, her daughter recalled dreaming about her Papa “asking her to be strong and to take care of her siblings and their mother.’’

Rita and Florjohn began living separately last year because of his drug addiction, but she said they remained good friends for their daughters’ sake. “The girls miss him very much,” she said.

“Once, he asked me in jest if I still love him because he wanted us to get back together. I told him: ‘Once you’re a changed man, you’ll find us again right exactly where you left us.’”

But there would be no reunion now, as Cruz’s Oct. 17 poem seemed to have foretold. “Where is home?” he wrote.

His final stanza, like the manner of his death, was unsettling. “They think they can take me? From their status they owe it to me. I swear, I’ll punish them slowly. Killing them one at a time, driving them crazy.”

The family is burying Cruz today at Sangandaan cemetery in Caloocan. 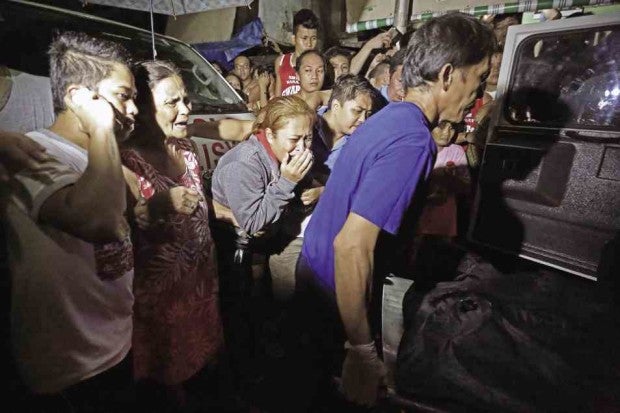