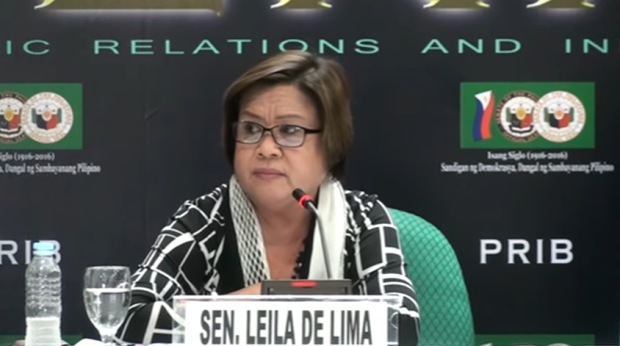 Senator Leila de Lima on Friday called the head of the Volunteers Against Crime and Corruption (VACC) a “creepy clown with a horrible dark mask.”

De Lima was referring to Dante Jimenez, chair of VACC, who filed a disbarment case against her along with former ranking officials of the National Bureau of Investigation (NBI) and whistleblower Sandra Cam, still over the senator’s alleged involvement in illegal drugs.

She said the case was “all part of a circus.”

“This is all part of a circus. And just like in all circuses, clowns are part of the amusement,” the senator said in a statement.

“For the part of Dante Jimenez, I could only shrug my shoulders in utter dismay at how he brings down with him the integrity and credibility of the anti-crime group he heads.”

“Mr. Jimenez is a creepy clown with a horrible dark mask, obsessed at being in the headlines instead of finding out the truth and justice for the thousands of victims of unresolved drug-related killings in our country,” De Lima said.

She said the rest of the complainants like Cam, former NBI officials Reynaldo Esmeralda and Ruel Lasala have “shady characters.”

“They are all just being used by the master puppeteer and vice versa,” the senator said.

“They are also using (President Rodrigo) Duterte’s obsession with my destruction to enable themselves, by currying favor with the President, and in doing so attempt to stay relevant despite the banality of their role in all of this circus,” De Lima said.

“The role of the three can be more accurately compared to the circus act of performing monkeys,” she added. RAM/rga