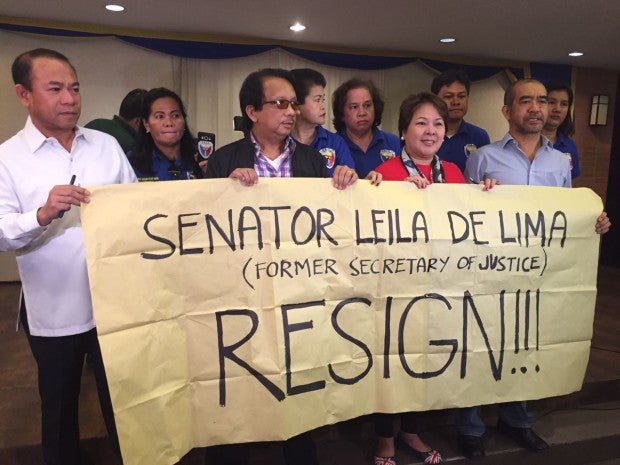 The Volunteers Against Crime and Corruption (VACC) together with former ranking officials of the National Bureau of Investigation (NBI) want Senator Leila de Lima stripped of her title as a lawyer.

In a 43-page complaint filed before the high court’s Office of the Bar Confidant, VACC, together with former NBI officials Reynaldo Esmeralda and Ruel Lasala and whistle blower Sandra Cam, said De Lima should be disbarred for gross immorality, violation of the Lawyers’ Oath and the Code of Professional Responsibility.

“The practice of law is a privilege…It is a privilege that can be revoked, subject to the mandate of due process once a lawyer violates his oath and the dictates of legal ethics,” the complaint stated.

The complaint was based on the testimonies of witnesses during the House Committee on Justice’s probe on the proliferation of illegal drugs inside the New Bilibid Prison (NBP).

Based on the testimonies of witnesses including NBI officials and high profile inmates, complainants said “respondent in this case knew that what were sold and traded were all prohibited drugs. Sen. De Lima did not only provide protection for the incarcerated drug lords to ensure the proliferation of illegal drug trade, not only inside Bilibid but also from the outside.”

They noted that De Lima spent P86.1 million during the campaign.

“For all the [advertisements] she contracted during the election campaign, where would she get the money from? One could not turn a blind eye on her actual source of [funds]. She had generous benefactors from inside the Bilibid,” the complaint stated.

The complaint cited the testimony of Sanchez who, before Congress, said he saw two videos of De Lima when her driver managed to pry into Dayan’s phone. Sanchez also describsed De Lima’s closeness to Dayan.

“Measured against the definition of gross immorality, we find Senator De Lima’s actions grossly immoral. Her actions were so corrupt as to approximate a criminal act, for she has a relationship with a married man, who in all appearances, was married to another and with whom he has a family. Her actions were also unprincipled and reprehensible to the highest degree,” the complaint stated.

“All these taken together leads to the inescapable conclusion that respondent (De Lima) was grossly imprudent in managing her personal affairs. The fact remains that her relationship with Ronnie Dayan, a married man, is grossly immoral. Worse, she never denied such relationship,” it added.

De Lima has three other disbarment cases pending. All the other cases were filed in 2012.

The other complaints against De Lima were filed separately by Atty. Ricardo Rivera and Fernando Perito and Nephtali Aliposa, both about De Lima’s alleged defiance in following a Supreme Court temporary restraining order issued November 2011 when she stopped former President Gloria Macapagal-Arroyo and her husband Jose Miguel “Mike” Arroyo from leaving the country for medical treatment. CDG/rga