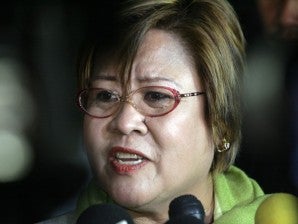 MANILA, Philippines—Justice Secretary Leila De Lima on Tuesday said she did not defy the Supreme Court’s temporary restraining order when she stopped former President Gloria Macapagal-Arroyo from leaving the country for medical treatment.

“I did not defy that TRO. It was the former President who is in a hurry to leave the country despite the pendency of the case,” De Lima said.

The high court, last year, allowed Arroyo to go abroad for medical treatment after meeting the requirements set by the high court. At the airport, the police stopped Arroyo and her family from leaving the country.

“The official copy of the TRO has not yet been served to us,” De Lima said.

She added that the DOJ only came to know about the TRO from media reports.

“As of November 15, 2011, late afternoon when the TRO was issued, we have not received any notice from the Supreme Court, De Lima told JBC adding that they have no way of verifying it.

“We cannot do anything until it is verified,” she added.

Supreme Court Associate Justice and JBC Presiding Officer Diosdado Peralta asked De Lima “if you received an injunction from any court of law, as a counsel, what would you do?”

“If on the face of the order, it appears to be regular, then there is no option but to obey,” she said.

But Peralta pointed that that lawyers are all taught to follow lawful orders of any court.

“If any lawyer disagrees with the court order, then that lawyer may only file the necessary motions questioning the ruling. You state your grounds rather than just disobey it,” Peralta said.