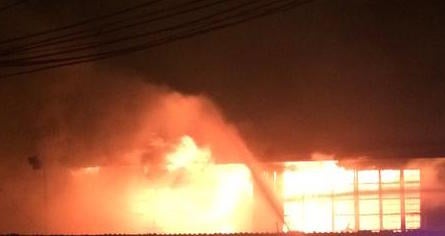 MANILA — At least 20 homes were destroyed in a two-hour fire that hit a residential area in Pasig City on Wednesday evening.

Senior Fire Officer 1 Caroline Orlina, duty operator at the Bureau of Fire Protection-Pasig at that time, said the fire, which left around 70 families homeless, started around 6:42 p.m. at Purok II at East Bank Road in Barangay Sta. Lucia Pasig.

Based on initial investigation, BFP said the fire originated from the second floor, left portion of the house of a certain Maria Elena Dulay. The fire reached fourth alarm around 7 p.m.

At least 20 firetrucks from the BFP and volunteer fire organizations arrived to put the fire under control at 8:23 p.m. The fire was declared out around 9:06 p.m.

The BFP said there was no reported casualty at the fire-hit shanty.

Total damage to property was placed at around P2.5 million.

Fire investigators are still determining the cause of fire. The affected families will temporarily stay at the barangay’s covered court.  SFM/rga