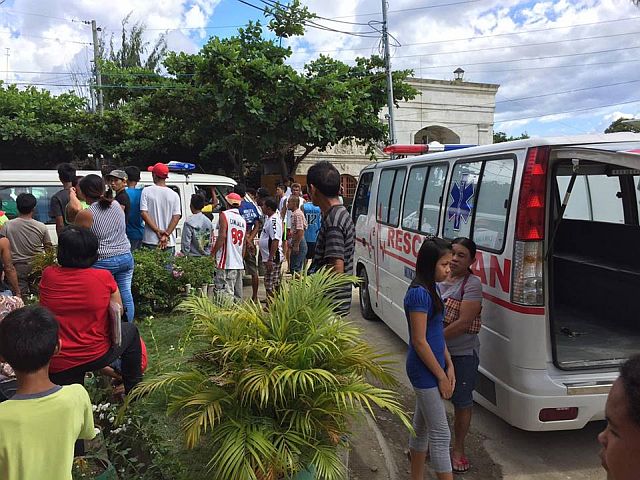 Those injured in the Cebu accident involving a Canter truck that lost its brakes and rammed a coconut tree on Oct. 25, 2016, were brought to the Kintanar Memorial Hospital in Argao but some were transferred to other hospitals. (Photo obtained by the CDN from the Facebook page of JR Chan)

CEBU CITY — The death toll in the truck accident in Argao town, Cebu, rose to six after two female passengers died while being treated at the province-owned hospital in Cebu City.

Margarita Geyrozaga, 45, died at 11:46 a.m. on Wednesday while Cirila Pantinople, 60, succumbed to her injuries past 6 p.m. the same day.

The two women were among the 11 victims who were brought to the Vicente Sotto Memorial Medical Center (VSMMC) in Cebu City for treatment following the accident on Tuesday.

Their deaths were confirmed on Wednesday night by public school teacher Evelyn Pantinople, a niece of Cirila.

The four other fatalities were Jelyn Pescadero, 29, who was pregnant; her son Jaymar, 8, and her nephew Joven Neri Jr.; and another female passenger Anastacia Geverola, 65.

The victims were on board a Canter truck loaded with vegetables, that was heading for the Carbon Public Market, when it lost its brakes and hit a coconut tree before falling on its side in Barangay Gutlang, Argao town, on Tuesday.

Evelyn, a teacher at the Umapad Elementary School in Mandaue City, complained that the nurses at the emergency room were not responding promptly to their requests for assistance.

Evelyn said she was there when Geyrozaga died past 11 a.m., and was told by Geyrozaga’s relatives that the medical staff only attended to the crash victim when her condition worsened.

When they were attending to her aunt Cirila Pantinople, Evelyn said she noticed that Pantinople was having difficulty breathing. But when she told the nurses about it, she had to wait minutes before getting a response.

In the meantime, PO2 Howard Maynopas of the Argao police station said they were preparing charges against the truck driver, Edgar Pescadero, who was still detained.

While they had yet to coordinate with the victims’ families, Maynopas said Pescadero would be facing reckless imprudence resulting in multiple homicide, multiple serious physical injuries with damage to properties.

Maynopas said they were still investigating the cause of accident although initial reports showed faulty brakes caused the accident.

He said the truck was overloaded with cargoes and farmers.  SFM