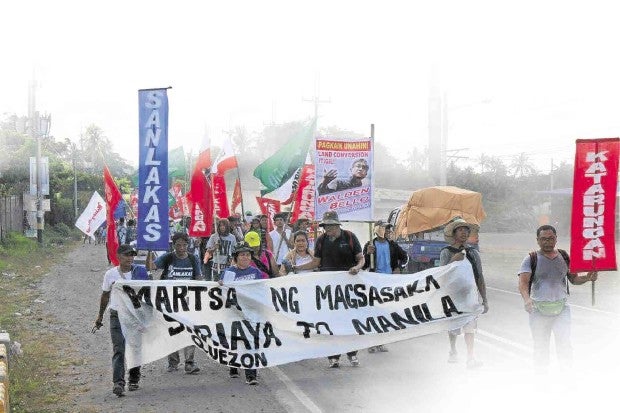 In this April 2016 file photo, farmers on a protest march for genuine land reform and the return of coconut levy reach the Marharlika Highway in Quezon province after starting their 122-km journey on foot to Manila in the town of Sariaya. CONTRIBUTED PHOTO

LUCENA CITY, Quezon – Coconut farmers, land settlers and indigenous people started their protest caravan from this capital city to Manila on Sunday to press their demands on President Rodrigo Duterte to speed up the return of the multi-billion-peso coconut levy fund, full implementation of the government land reform program and a stop to the wave of harassment of peasants.

“When President Duterte was elected, we thought that these protest activities would be over. But, sad to say, it seems that the President has already forgotten his promises,” Maribel Luzara, president of the Kilusang Magbubukid ng Bondoc Peninsula (KMBP), one of the protest leaders, told newsmen here.

Around 200 farmers from Bondoc Peninsula, northern Quezon and tribal leaders from the Sierra Madre started the caravan in Barangay (village) Talipan in Pagbilao town aboard several passenger jeeps.

When the protesters entered Lucena City, in Barangay Ibabang Dupay, the participants walked more than three kilometers to the Perez Park to wrap a steal chain around the concrete coconut marker there to symbolize the continuing misery and poverty of the farmers.

Luzara cited Mr. Duterte’s failed promise to the coconut farmers to distribute the P73-billion coco levy fund to the farmers, within the 100 days of his administration.

Luzara also said that Mr. Duterte’s promise to speed up the distribution of lands under the Comprehensive Agrarian Reform Program has not been fulfilled.

“And worse, instead of lands, what we’re getting are renewed harassments and violence from the hands of the landowners and their armed goons,” she said.

Farmers from Quezon, a major coconut-producing province, are believed to be the biggest contributors to the coco levy fund, a tax exacted from them between 1973 and 1982, during the Marcos regime.

The fund is expected to benefit millions of coconut farmers and their families from about 21,000 coconut-producing barangays across the country.

Several times, Agriculture Secretary Emmanuel Piñol reported that the President had ordered the release of the coconut levy fund to the farmers, but, no legislative measure has been approved to support the directive.

Jansept Geronimo, spokesman of the national farmers’ group, Kilusan Para sa Tunay na Repormang Agraryo at Katarungan Panlipunan (Katarungan), said more farmers from Mindoro and Bicol region would join the people’s camp that that they would set up in front of the offices of the Department of Agrarian Reform and Department of Environment and Natural Resources in Quezon City.

Geronimo said they would also hold a protest in front of the House of Representatives in Batasan.

The protesters will be holding a protest camp until Oct. 28.

“The farmers are forced to return to the streets again because of the failure of the Duterte administration,” he lamented.

Marcelino Tena, tribal leader from the Sierra Madre and leader of the Samahan ng mga Katutubong Agta na Ipinagtatanggol at Binabaka ang Lupaing Ninuno (SAGIBIN-LN), appealed to President Duterte and Environment Secretary Gina Lopez to speed up the processing of their certificates of ancestral domain title.

He said the Sierra Madre tribesmen have been getting threats on several fronts, particularly from unabated logging, and government dam and road projects.

Elma Sanchez, coordinator of the Real Farmers Association in Real town in northern Quezon, urged the DENR to acknowledge their rights to the lands that they have been tilling for generations.

“It was declared as a forest reserve by former President Marcos but ever since, our ancestors have been tilling it. It is now a vast productive land from our own hard work,” she said.

She said more than 2,000 farmers families have been tilling plots of the land in the villages of Maragondon, Tanauan, Tignoan, Llavac and Maunlad.

“President Duterte, please also attend to our plight and not just focus on illegal drugs,” she said.

According to Sanchez, some of the areas have been land-grabbed by strangers.

“We’re surprised by the arrival of Chinese and other strangers all claiming ownership to the vast tracks of lands,” she said.

“We will never stop marching and protesting until we obtain justice for our
cause,” he said.

A total of 750 certificates of land ownership awards (CLOA) covering 1,750 hectares in Sariaya have pending cases of revocation initiated by the landowners. The cancellation of CLOAs by the government would affect 2,000 families of farmer-beneficiaries.

In April, Ugnayan and KMBP members conducted the 122-kilometer protest march and hike to Manila to appeal for the return of their lands and the coconut levy fund.

The marchers carried a white streamer demanding justice for the death of KMBP member Raul Esco, who was shot and killed on Aug. 16 by unidentified men while he was on his way home in the Hacienda Matias in San Francisco town.

The KMBP tagged Esco as one of the more than 1,000 victims of extrajudicial killings under the Duterte administration.

At least seven KMBP farmer-leaders, including Esco, had been killed since 1998. Until today, justice remains elusive for them and their families.

The farmers are also faced with a string of criminal charges being filed by the landowners against them.