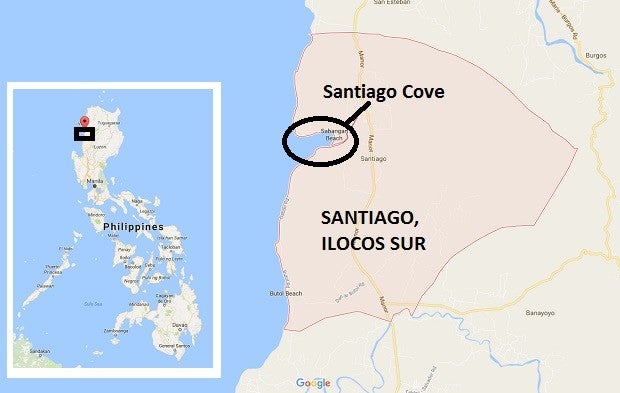 SANTIAGO, Ilocos Sur—Divers yesterday retrieved the bodies of a pilot and his female passenger from an aircraft that sank 20 feet deep at Santiago Cove, where it crashed on Friday.

The retrieval team pulled out the remains of pilot John Kaizan Estabillo and Paula Bianca Robles from a cockpit window of the Cessna aircraft, which sank about 500 meters from the shoreline in the village of Sabangan.

The plane, bearing registration number RP-C7838, flew from the airport at Vigan City and was seen flying around the cove by witnesses when it suddenly pulled up to avoid a zipline which was set up 50 to 70 meters high across the beach.

The right wing of the plane snagged the zip line forcing it to fall into the sea at 3:28 p.m., said Michael Barba, a resident here.

Fishermen were the first to sail to the area where the plane sank, where its wreck was located after nearly an hour, said Candon City Fire Marshal Nemesio Valenciano, who was brought in to help in the rescue.

The divers located the plane and found the bodies of Estabillo and Robles strapped to their seats.

But the divers did not have equipment to pry the cockpit doors open, although they and volunteer fishermen were able to pull out the victim’s belongings from the rear portion of the aircraft which helped the police identify the two fatalities.

Robles was apparently a flight student, and was a member of an airline cabin crew.

An identification card states that Estabillo was a member of the De La Salle College of Saint Benilde Alumni Association.

Other documents state the aircraft belonged to the Leading Edge International Aviation Academy Inc., apparently a flight school based in Taguig City.

Disaster relief workers, the Philippine Coast Guard and the Philippine Navy who deployed divers to the sea, suspended operations on Friday night and waited for equipment. They resumed at 6 a.m. on Saturday morning.

The families of Estabillo and Robles were at the beach when the remains were pulled to the surface at 7 a.m. The remains were brought to a Candon City hospital.—LEONCIO BALBIN