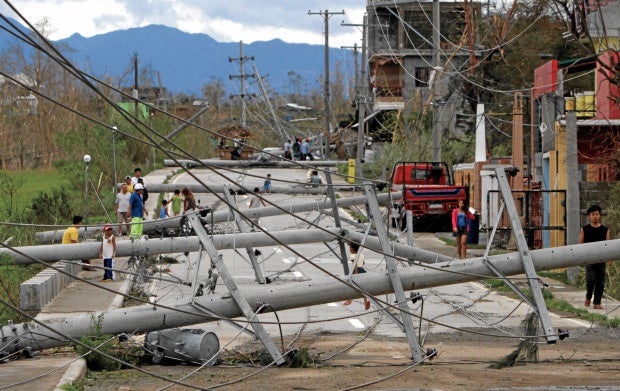 Disaster authorities on Saturday put the damage caused by supertyphoon “Lawin” in four affected regions at over P657 million—P581.9 million for infrastructure and P75.8 million for agriculture.

The estimate was based on aerial assessments and could increase as more information from authorities on the ground come in.

The National Disaster Risk Reduction and Management Council (NDRRMC) also said a total of 29,533 families or 116,826 persons were accommodated in 1,095 evacuation centers in Ilocos Region, Cagayan Valley, Central Luzon and the Cordillera Administrative Region (CAR). These included evacuees from communities near river systems, particularly in Bataan and Pampanga.

Clearing operations in road sections and bridges were ongoing as well as restoration of power supply and communication lines, reports added.

Power interruptions were still being experienced in 160 cities and municipalities in the four affected regions.

Cellular lines have been restored, except for Internet and landline services in most areas in Ilocos Norte, while intermitent signals were experienced in Cagayan, Isabela and Ilocos Sur.

Earlier, 38 domestic and 25 international flights of Cebu Pacific, CebGo, Philippine Airlines, SkyPasada, Northskyair, and Cathay Pacific were cancelled from Oct. 19 to 21 due to the bad weather condition.

Lawin entered the Philippine area of responsibility on Oct. 17, intensified into a super typhoon two days later but lost steam after it made a landfall.

The typhoon was barreling into southern China on Friday.  Chinese meteorological services said the typhoon made landfall shortly after noon in the city of Shanwei in Guangdong province, packing winds of up to 166 kilometers per hour before weakening to a tropical storm.

China had suspended dozens of flights and rail services in several southern provinces. In the city of Shenzhen, authorities ordered schools, markets and factories to close, halted public transportation and evacuated some areas.

Hong Kong had hunkered down as Haima lashed the financial hub with rain and wind gusts of up to 109 kph (68 mph). Schools and offices were shut, trading on the stock market suspended and commuter ferry services halted. More than 740 flights to and from the city’s international airport were canceled or delayed. —WITH A

Read Next
Learning to surf, minding the school
EDITORS' PICK
Infants bundled off; no one hurt in PGH fire
Tired of your Wi-Fi signal problems at home? Here’s a solution!
OPINION: Mischief Reef – where it all started
POVA x Mobile Legends Bang Bang: A partnership that’s built to win
CPA Australia and their designation: Advance your career
Fire-damaged PGH calls for donations
MOST READ
Leonen impeachment case moves forward in House
Hot, humid weather for PH on Monday — Pagasa
Longest recession since Marcos era
Long working hours are a killer, WHO study shows
Don't miss out on the latest news and information.