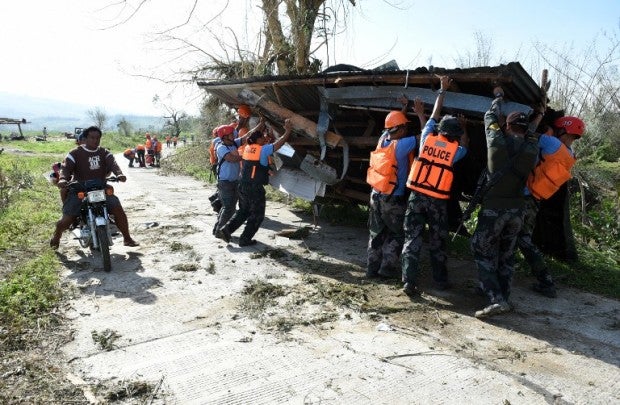 Policemen remove a roof, which was blown off its building by super typhoon Haima, along a road in a village in Penablanca town, Cagayan province, north of Manila on October 21, 2016. / AFP PHOTO / TED ALJIBE

PEÑABLANCA, Philippines – Hungry typhoon survivors huddled in makeshift shelters and waited for aid on Friday, after losing nearly everything from one of the most powerful storms to hit the Southeast Asian archipelago.

Eight people were confirmed killed and tens of thousands lost their homes as Lawin devastated farming and mountain communities across the north of the Philippines’ main island of Luzon.

“I cried when I saw my beans and squash plants that had been raked off by the winds. My mango trees were also toppled,” farmer Leonardo Longan, 66, told AFP in the town of Peñablanca, close to where Lawin made landfall.

For Longan, just like many of his neighbors, home is now an improvised shelter with palm leaves for a roof, blankets for walls and a bed made from the collapsed wooden wall of his old home.

He and his wife sent their four school-age children to live with a relative, and have borrowed rice from a local trader.

In Manila, a survey team was dispatched by plane on Friday to assess the damage in the Cagayan Valley region, large parts of which the authorities said was flooded by the overflowing Cagayan River.

But in Peñablanca, a farming town of about 42,000 people, Longan said aid had yet to arrive.

In San Pablo, another Cagayan Valley town about 20 kilometers south of Peñablanca, four families spent Thursday night on a roadside after Lawin flattened their homes.

“No one has helped us. It is just us and other families, helping each other on the side of the road,” Jovy Dalupan, a mother of two, told AFP.

Dalupan said her daughters, aged eight months and four years, had started coughing after being drenched during the storm and that their clothes were still wet.

“But we have nothing to change into,” she said.

Marasigan, the disaster agency official, said a military plane-load of food aid was flown to the region on Friday to augment supplies already there.

But Cagayan Valley, a mostly farming region, was not as badly affected as the Cordillera highlands, she said.

“The damage in the Cordilleras was heavy,” she said, with torrential rain unleashing landslides across the region.

“We have been saddened to learn that some people were hit by landslides as they fled their homes.”

More than 50,000 people in typhoon-affected areas in the north had received aid, although the total number of people who needed help was not known.

Communication lines have yet to be restored in three out of six Cordillera provinces and so the extent of the typhoon’s fallout there could not yet be determined, Marasigan said.

The Philippine islands are often the first major landmass to be hit by storms that generate over the Pacific Ocean. The Southeast Asian archipelago endures about 20 major storms each year, many of them deadly.

The most powerful and deadliest was Yolanda, which destroyed entire towns in heavily populated areas of the central Philippines in November 2013.

Lawin was the second typhoon to hit the northern Philippines in a week, after “Karen” (international name Sarika) struck on Sunday claiming at least one life and leaving three people missing.

Lawin hit Hong Kong and the southern Chinese mainland on Friday, after weakening into a typhoon with wind speeds of 145 kilometers an hour.

More than 700 flights in and out of Hong Kong were cancelled or delayed as the city’s usually frenetic streets were deserted with schools closed and other precautions put in place under a Number 8 storm signal, the third-highest warning level./rga