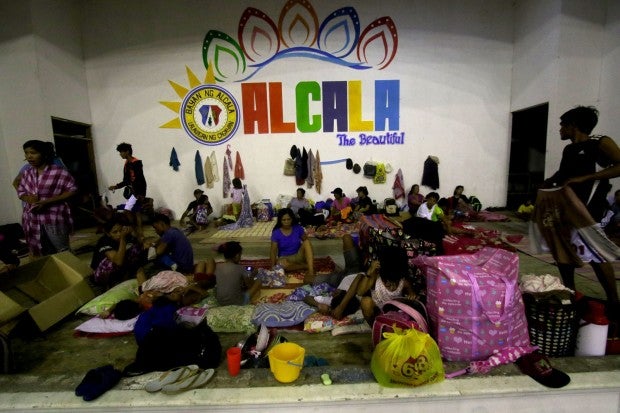 More than 700 residents living on the shoreline take refuge on Alcala Gymnasium after pre emptive evacuation due to Supertyphoon Lawin in Alcala town, Cagayan.
INQUIRER PHOTO / RICHARD A. REYES

“Around 13,428 families or 61,126 persons were affected in 118 barangays (villages) in the regions of Ilocos, Cagayan, Central Luzon, Bicol and Cordillera,” the NDRRMC said.

Lawin made landfall in Peñablaca, Cagayan at 11p.m. on Wednesday as a supertyphoon.

The NDRRMC said that it had received reports from the regional DRRM councils that a number of infrastructures had been damaged, trees were uprooted and power lines were toppled.

There were no immediate reports of deaths, it added.

The NDRRMC said a region-wide power outage was reported in the Cordillera Administrative Region.

“Some road networks in CAR, Cagayan and Isabela are impassable due to landslides, and toppled trees and electric posts” it added.

The government is also getting ready for road reconnaissance for initial asssement of the damage  brought by the typhoon.

Lawin continued to weaken on Thursday morning, and is expected to leave the Philippine area of responsibility within the day.