‘Lawin’ rekindles fearsome memories of ‘Yolanda’ as it makes landfall

BINALONAN, Philippines – Supertyphoon “Lawin” (internationally know as “Haima”) slammed into Cagayan province in the northeastern Philippine coast late Wednesday with ferocious winds and rain that rekindled fears and memories from the catastrophe wrought by Typhoon Yolanda (internationally known as Haiyan) in 2013.

Lawin, which has sustained winds of 225 kilometers per hour and gusts of up to 315 kph, made landfall at Peñablanca town in Cagayan province shortly before midnight, weather officials said. Many villages lost power and intense winds tore tin roofs off houses.

“We can’t go out because the wind is so intense, trees are being forced down,” Councilor Elisa Arugay told DZMM radio from Camasi village in Peñablanca.

Officials were concerned because the powerful typhoon struck at night and is expected to hit towns and cities amid power outages. After Cagayan, Haima is forecast to blow across the mountainous province of Apayao and then lash Ilocos Norte province before exiting into the South China Sea Thursday morning.

The government’s weather agency raised the the storm warning to the highest level in six northern provinces, which meant that powerful winds could inflict “very heavy to widespread damage” and whip up storm surges of up to five meters (16 feet), enough to engulf shanties in many rural communities.

“We are possibly dealing with a typhoon that is even stronger than Typhoon Yolanda,” said Executive Secretary Salvador Medialdea, referring to the local name for Haiyan. “We must, therefore, brace ourselves for the possible effects of a typhoon of this magnitude.”

Many of the provinces are still recovering from powerful Typhoon Sarika, which left at least two people dead and displaced tens of thousands of villagers last weekend. The region was spared from a major disaster due in part to the storm’s speed, officials said.

In Beijing, Philippine President Rodrigo Duterte urged people in the typhoon’s path to heed orders by disaster agencies, including abandoning coastal communities prone to storm surges. Duterte is on a state visit to China and is to fly home Friday.

“We only pray that we be spared destruction such as in the previous past which brought agony and suffering to our people, but we are ready,” Duterte said at a news conference.

A massive evacuation was underway in the northern provinces, especially in landslide-prone towns which often become isolated due to toppled trees and mudslides. Thousands of villagers, helped by police and army troops, clambered on trucks with their children and bags of clothes, sleeping mats and cooking pots to be taken to emergency shelters.

Lawin was hurtling westward at a speed of 25 kph (15 mph) with a vast rain band 800 kilometers (500 miles) wide that could bring heavy to intense rain in Luzon, including its central rice-growing plains.

About 20 typhoons and storms lash the Philippines each year, adding to the many burdens in a country that is also threatened by earthquakes and volcanic eruptions and considered one of the world’s most disaster-prone nations.

In November 2013, Typhoon Haiyan struck the Visayas, in the central region of the Philippines, with ferocious power, leaving more than 7,300 people dead or missing and displacing more than five million others after leveling entire villages. 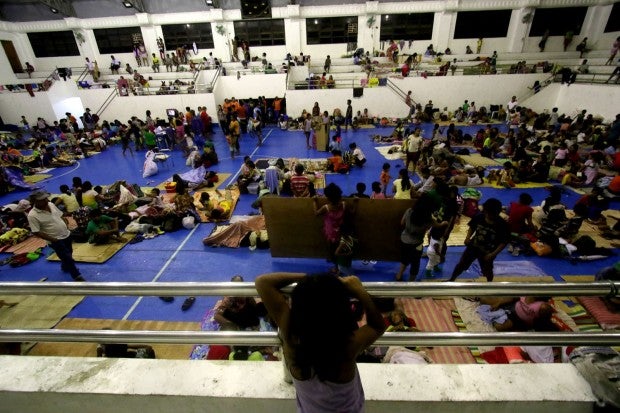 More than 700 residents living on the shoreline take refuge on Alcala Gymnasium after pre emptive evacuation due to Supertyphoon Lawin in Alcala town, Cagayan. INQUIRER PHOTO / RICHARD A. REYES