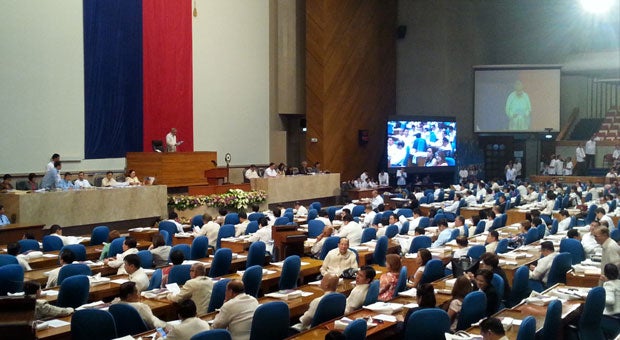 MANILA — The House of Representatives on Wednesday approved the so-called national “budget for real change” of the Duterte administration amounting to P3.35 trillion for 2017.

There was hardly any opposition to the budget’s approval, except for a point raised by opposition lawmaker Albay Representative Edcel Lagman. The final voting at the third and final reading was 243-5-1.

Lagman, the lone abstention, clarified he was not against the passage of the national budget.

But he expressed “grave reservation” that President Duterte’s Oct. 11 letter certifying as urgent the passage of House Bill No. 3408 or the 2017 General Appropriations Act (GAA) failed to comply with the conditions set by the Constitution.

Lagman quoted Section 26, Article VI of the Constitution as stating that “no bill passed by either House shall become a law unless it has passed three readings on separate days, and printed copies thereof in its final form had been distributed to its Members three days before its passage, except when the President certifies to the necessity of its immediate enactment to meet a public calamity and emergency.”

Mr. Duterte said that the immediate enactment of the 2017 national budget was needed to “maintain continuous government operations following the end of the current fiscal year (FY), to expedite the funding of various programs, projects, and activities for (FY) 2017, and to ensure budgetary preparedness that will enable the government to effectively perform its Constitutional mandate.”