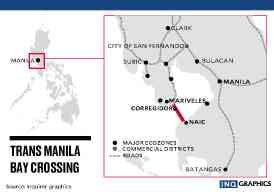 CITY OF SAN FERNANDO—A bridge across Manila Bay, starting from Naic town in Cavite province and ending in Mariveles town in Bataan province, is being pushed as a solution to the traffic crisis in Metro Manila.

Felicito Payumo, former chair of the Subic Bay Metropolitan Authority (SBMA), named his idea the Trans Manila Bay Crossing, which he first pitched in 1987 on his first term as Bataan representative.

He revived the idea after observing that there was no more real estate left to host new roads or expand the mass transit system.

“The Trans Manila Bay Crossing poses no right of way issue. It will not only push growth outside of Metro Manila but will also connect three regions with close to 40 percent of the population and with gross domestic product (GDP) exceeding 50 percent of our total GDP,” Payumo said.

The plan for a combined bridge and tunnel also completes “the Big Loop,” or what is now a network of existing and integrated roads south and north of Metro Manila, he said.

The planned Cavite-Laguna-Expressway leads to Quezon province and the Bicol region.

In an e-mailed letter, Payumo said: “If there are 18 million trips each day by 13 million inhabitants in Metro Manila, add to this the pass-through trips from Southern Luzon to Central and northern Luzon and vice versa, then we know why traffic crawls on Edsa (Epifanio delos Santos Avenue). There is only one arterial road that connects Southern Luzon to Central Luzon through Metro Manila, and that is Edsa. This pass-through traffic should not go through Metro Manila if the Cavite-Corregidor-Bataan connection is constructed.”

The Trans Manila Bay Crossing would make the Clark International Airport at the Clark Freeport only an hour’s drive away from Cavite, he said.

Payumo said his idea was similar to Japan’s Tokyo Aquiline.

He said it was easier to build an access route across Manila Bay because roads and bridges can be constructed on Corregidor Island and smaller islands.

“The tunnel would only be necessary in the southern channel to Cavite,” he said.