Duterte: ‘If I encourage killings, fine’ 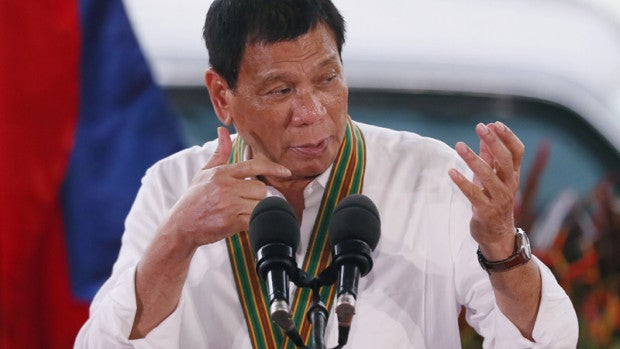 “Well, that is bad,” Duterte said in an interview with Al Jazeera, when asked about casualties in the administration’s antinarcotics campaign that had no actual involvement in illegal drugs.

While saying that such cases will be investigated, Duterte noted in a hypothetical example that the police had no criminal liability over the deaths of innocent civilians during an official antidrug operation, even if they number about a thousand.

“Let me tell you. This is the law of my land. Here is a police, here is a gangster. He’s armed with M16, the gangster only a pistol. But when they meet, they exchange fire. With the police with the M16, its one burst, prrrt, and hits one thousand people there and they died. There’s no criminal liability,” Duterte said.

The President drew parallels between the innocents killed in the drug war and civilians killed during airstrikes on militants in US operations in Vietnam and Afghanistan.

“People judge best when they condemn. So they will always place you in the bad light. But the situation does not go for that. And that explains the reason why until now, I have yet to hear an apology for those who have, in Vietnam, in Afghanistan, never mind about the militants, kill them! We don’t, but then, in the process, two families, hospital, oh its collateral damage. Then why is it, is it a collateral damage to the West and to us, it is murder,” he added.

Duterte denied allegations that he was encouraging vigilante killings with his controversial pronouncements, but said he was “fine” with it and had no business in criminals getting killed.

“No, I said I will kill you. If I encourage, fine,” Duterte said when asked if he agreed that he had encouraged summary executions.

“I do not play by conjectures. I do not make assumptions. I just say what I should be saying as the President and as a mayor. My, if the criminals there are killed by the thousands, it’s not my problem. My problem is how to take care of the law-abiding, God-fearing, young persons of this Republic because they are our resources,” he said.

As of Oct. 17, the Inquirer’s “Kill List” notes 1,338 drug-related deaths since June 30 or after President Duterte took office./rga