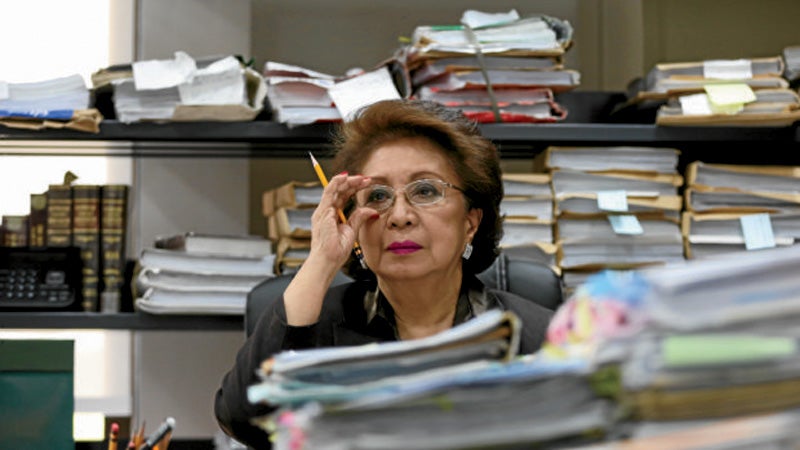 “It’s not going to happen,” Ombudsman Conchita Carpio Morales said on Monday when asked by reporters if her office would initiate its own investigation of Sen. Leila de Lima.

Morales cited a lack of firm leads establishing De Lima’s connection to the proliferation of illegal drugs at New Bilibid Prison (NBP) when the senator was justice secretary in the administration of President Benigno Aquino III.

“Everything is just an allegation so far,” she said. “There is no lead that will prompt us to initiate an investigation.”

Morales also noted that the Department of Justice (DOJ) had already started its probe of the two criminal complaints filed separately by the Volunteers Against Crime and Corruption on Tuesday and former National Bureau of Investigation deputy directors Ruel Lasala and Reynaldo Esmeralda on Thursday.

De Lima and other DOJ officials who served with her were accused of drug trafficking.

The DOJ has convened an investigative panel composed of five prosecutors to look into the two complaints.

Normally, gathering evidence is done before the complaint is forwarded for preliminary investigation. The respondent is given the chance to counter the complaint before the state prosecutor determines whether there is probable cause for indictment, subject to the approval of the Ombudsman.

One such case that can be tackled by the Office of the Ombudsman is the complaint filed by Chief Insp. Jovie Espenido, police chief of Albuera, Leyte province. In his complaint last week, Espenido claimed that De Lima received payoffs from suspected Eastern Visayas drug lord Kerwin Espinosa, who was arrested on Monday.

Morales, however, said the complaint is yet to be forwarded by her Visayas office. “It has not reached us,” she said.

In the House of Representatives, members of the justice committee, which conducted an inquiry on drug trafficking at NBP, appeared to be at loggerheads on whether their report should include a recommendation to prosecute De Lima. The panel met behind closed doors on Monday, and will resume deliberations today.

Oriental Mindoro Rep. Reynaldo Umali, the committee chair, said at the weekend that it was unlikely the panel would propose the filing of criminal charges against De Lima, pointing out the hearing was in aid of legislation.

Kabayan Rep. Harry Roque said in a press conference on Monday he disagreed with this position, stressing that De Lima “should be held liable for benefiting from the drug trade… and for coddling drug lords.”

Convicted felons said they contributed to De Lima’s senatorial campaign in May in exchange for her protection. She has denied wrongdoing.

Roque said these acts were in violation of the Comprehensive Dangerous Drugs Act of 2002 and the Anti-Graft and Corrupt Practices Act.

“I understand why the majority wants to desist from such a recommendation because it wants to avoid the impression that the investigation was a witch-hunt against Senator De Lima. However, we are elected legislators and we took an oath to uphold the laws of the land. I believe it is incumbent upon the members of Congress to recommend the filing of criminal charges if we believe that our laws have been violated,” said Roque, a member of the committee.

Roque said the Senate investigation of the P728-million fertilizer scam in 2004 recommended the filing of charges against then Agriculture Secretary Jocelyn “Joc-joc” Bolante. —WITH A REPORT FROM NIKKO DIZON