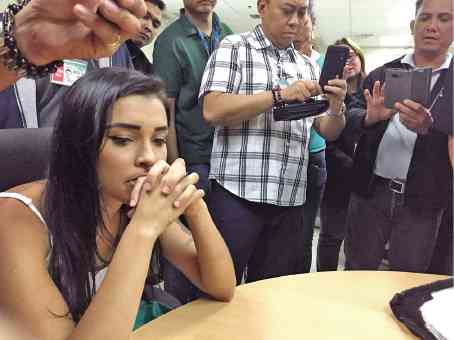 Immigration officials at Ninoy Aquino International Airport arrested over the weekend a 19-year-old Brazilian woman who tried to smuggle into the country five kilograms of cocaine.

Immigration Commissioner Jaime Morente identified the suspected drug mule as Yasmin Fernandez Silva. She arrived in Manila on Saturday onboard an Emirates flight from Dubai that originated from Sao Paulo, Brazil.

Operatives from the Bureau of Immigration’s (BI) monitoring and security unit were tipped off about Silva’s arrival by the US Drug Enforcement Administration (DEA).

She was apprehended by members of the antidrug interdiction task group after she submitted herself for inspection at the immigration arrival counter.

A check of her luggage yielded about 5.2 kg of cocaine, prompting the Philippine Drug Enforcement Administration (PDEA) to place her under custody.

“This one and other previous apprehensions were based on [intelligence] information passed on to us by international law enforcement organizations,” BI spokesperson Antonette Mangrobang said on Monday.

“The report said our [officials] had difficulty conversing with Silva because she speaks Portuguese. But based on the report, she knew she was carrying cocaine because she needed the money,” she added.

A check of the bureau’s travel records showed that Silva had not been to the Philippines before.

The two Chinese and Russian men who arrived at Naia on board an Emirates flight were apprehended, based again on a tip from the DEA according to airport and PDEA officials.