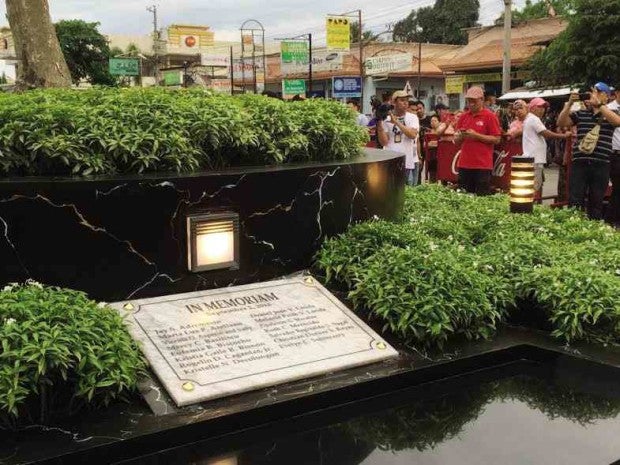 The names of victims of the Sept. 2 Davao City blast are etched on this marble tablet. —GERMELINA LACORTE

DAVAO CITY—A marker, made of marble and etched with the names of the 15 people who died in the night market explosion here last month, will remind people not only of death and tragedy but of the strength and triumph of the human spirit, Davao City Archbishop Romulo Valles said at a Mass that marked its unveiling last week.

“I won’t say anything if I don’t like it, but the edifice is so beautiful, so elegant, so congrats,” Valles said of the two-tiered circular black marble structure topped with green ornamentals and a pink bougainvillea, with a white marble plaque at its base listing the names of the victims.

“But that is a marker of tragedy, a marker of death, of pain, why do we put it there?” Valles said to the gathered congregation that included some of the injured and the families of those who died.

“Like some people who say why make the sign of the cross, it is the image of death?” the bishop said.

But he said that while the marker symbolized death, tragedy and pain, it was also a “marker of life, of strength, of the triumph of the spirit, of justice, of how goodness prevails over fear.”

Davao City Mayor Sara Duterte said the memorial honored those who died and those who survived the blast.

“We commit to forever remember the victims of the bombing on Sept. 2,” she said. “We also commit to do everything possible to stop all acts of terrorism from happening again.”

The memorial, at the actual site of the blast that also wounded about 70 people, will be a “place for prayer, for peace and remembrance,” Duterte said.

“It’s a reminder that the human spirit will prevail,” Valles said.

The mayor welcomed the reported arrest of three suspects in the explosion.

The military and the police Criminal Investigation and Detection Group in the Autonomous Region in Muslim Mindanao (CIDG-ARMM) said the suspects were arrested in separate operations in Cotabato City.

“These bombs were ready to set off,” Uy said, adding that they were looking at the possibility the suspect was also involved in bomb attacks in Central Mindanao and other places. —GERMELINA LACORTE AND ALLAN NAWAL