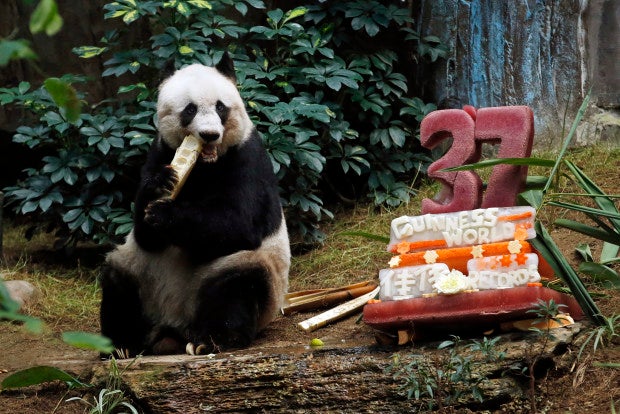 Giant panda Jia Jia eats bamboo next to her birthday cake made with ice and vegetables at Ocean Park in Hong Kong, Tuesday, July 28, 2015 as she celebrates her 37-year-old birthday. Jia Jia broke the Guinness World Records title for Oldest Panda Living in Captivity.” AP

Jia Jia was put down after her health rapidly deteriorated over the last two weeks, leaving her unable to walk without difficulty, a statement from the Ocean Park Hong Kong theme park said.

Born in the wild in China’s Sichuan province in 1978, Jia Jia was given to Hong Kong in 1999 to mark the semi-autonomous city’s handover by Britain two years earlier.

But as her health declined in recent days, her food consumption slumped from more than 10 kilograms (22 pounds) a day to less than three and her weight also declined.

“Her state became so debilitated that based on ethical reasons and in order to prevent suffering, veterinarians from the Agriculture, Fisheries and Conservation Department and Ocean Park agreed to a humane euthanasia for Jia Jia,” the theme park said.

“This is a day we knew would eventually come, but it is nevertheless a sad day for everyone at the Park, especially for the Park’s keepers who took care of her over the years,” Ocean Park chairman Leo Kung added.

“This is a day we knew would eventually come, but it is nevertheless a sad day for everyone at the Park, especially for the Park’s keepers who took care of her over the years,” Ocean Park chairman Leo Kung added.

In July 2015 the giant panda was presented with a towering birthday cake made from ice and fruit juice with the number 37 carved on top in her enclosure.

Jia Jia, whose name translates as “excellence”, picked at fruit slices and bamboo around the ice cake to celebrate her big day as a record-breaking bear — becoming the oldest panda panda ever living in captivity.

There are fewer than 2,000 pandas now left in the wild, according to the World Wildlife Fund, as their habitats have been ravaged by development.

Given their low birthrate, captive breeding programs have become key to ensuring their survival.

Read Next
Visayas ‘drug lord’ Kerwin Espinosa arrested in Abu Dhabi
EDITORS' PICK
Nestlé Philippines’ ‘NESCAFÉ Plan’ bags Grand Anvil at PRSP 56th Anvil Awards
Smart reinforces superiority with best speed and mobile video experience in PH
Every Filipino home can now be a smart home with realme TechLife
New 3,045 COVID-19 cases push PH total active cases to 40,074
LTO’s P500-M deal for screws draws scrutiny
How to lose a PH genius: Wesley So officially a US citizen
MOST READ
How to lose a Filipino genius: Wesley So officially a US citizen
US lays out list of aid to ‘satisfy’ Duterte following VFA payment demand
Robredo on Sara Duterte leading poll surveys: Why are Filipinos drawn to leadership of this kind?
Rights lawyer survives attack by playing dead, loses all case files
Don't miss out on the latest news and information.