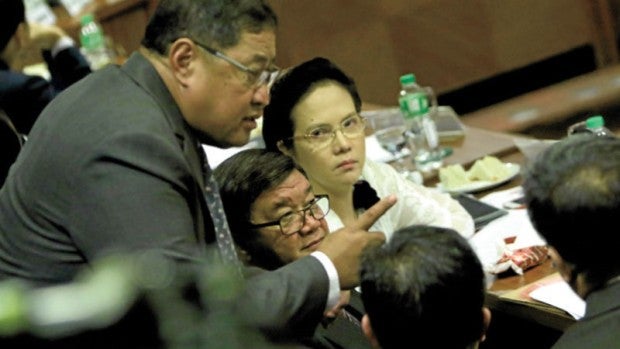 Despite her bashing in the House of Representatives, Sen. Leila de Lima is likely to escape a prosecution recommendation from the lawmakers that she received payola from convicts operating a multibillion-peso illegal drug business from the national penitentiary when she was the justice secretary.

Oriental Mindoro Rep. Reynaldo Umali, chair of the House committee on justice, said his panel’s report would be submitted to its members today for deliberation, stressing it would be in aid of legislation, not prosecution.

“Personally, the revelations in these committee hearings made it more imperative for us … to reimpose the death penalty,” Umali said in a radio interview.

“The four pillars of the criminal justice system are failing the people,” he said, referring to law enforcement, prosecution, the courts and the penal institutions.

“This is why you have to raise the level of fear factor among these convicted felons instead of letting them enjoy and do the things that kept them from reformation because the correctional pillar of the criminal justice system is failing,” Umali said.

The restoration of the death penalty is one of the priority measures pushed by President Duterte in Congress.

Although the House is staying away from recommending charges against De Lima, Justice Secretary Vitaliano Aguirre II is pursuing the preliminary investigation of drug trafficking charges against her despite her protestations that the Office of the Ombudsman, not the Department of Justice (DOJ), should do it.

“The Ombudsman has primary jurisdiction on those cases,” Aguirre conceded. “However, we will still conduct a preliminary investigation because the DOJ has concurrent jurisdiction on complaints filed before us,” he said.

“So whatever will be our findings, it will be forwarded to and reviewed by the Ombudsman,” he added. “I’m not using my (authority) only to persecute her.”

On Tuesday, the Volunteers Against Crime and Corruption, which had openly supported Mr. Duterte’s presidential campaign, filed a drug trafficking case against De Lima and seven others, including a convicted kidnapper and her former security aide who had testified against her in a congressional inquiry.

Both charges were in connection with her supposed complicity in allowing inmates at New Bilibid Prison, many of them convicted Chinese drug lords, to transact illegal drugs in exchange for millions of pesos in payoffs, an allegation De Lima has vehemently denied.

Aguirre, one of Mr. Duterte’s most trusted friends, pointed out that it was De Lima herself who first argued that the DOJ had concurrent jurisdiction with the antigraft body in handling criminal cases against public officials when she was justice secretary in the previous Aquino administration.

“The DOJ during her time conducted many preliminary investigation on cases which are cognizable by the Sandiganbayan. She said it was correct during her time. Now that we’re doing it, she’s saying we’re wrong,” Aguirre said.

He said De Lima had ordered a preliminary investigation into the pork barrel scam and the plunder case against former President and now Pampanga Rep. Gloria Macapagal-Arroyo on the alleged misuse of P366 million in intelligence funds of the Philippine Charity Sweepstakes Office.

“This is nothing new to her because it was her who first did this,” he said. “It was also her who first issued the immigration lookout bulletin order during her time as justice secretary. What she did then are just coming back to her.”

De Lima conducted fact-finding probes on all cases pertaining to the P10-billion pork barrel racket, which the DOJ then submitted to the Ombudsman for preliminary investigation.

De Lima, pictured by the President’s allies as the country’s biggest coddler of drug lords, had accused Aguirre of prejudging the complaints against her, saying it was obvious why her rivals went to the DOJ and not the Ombudsman.

“I’m not using my office to persecute her. I will only prosecute her,” Aguirre maintained.