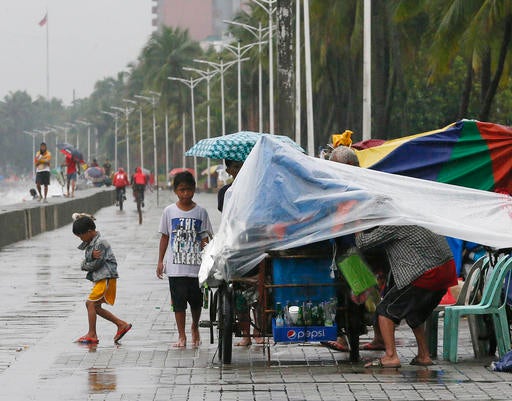 A few residents walk on a promenade under a slight rain brought about by Typhoon “Karen” Sunday, Oct. 16, 2016 in Manila, Philippines. The powerful typhoon, with sustained winds of 130 kilometers (80) miles per hour and gusts of 220 kph (136mph), has slammed into the northeastern Philippines and left at least two people dead, knocked out power and isolated villages in floods and toppled trees. AP Photo/Bullit Marquez

A powerful but fast-moving typhoon blew out of the northern Philippines on Sunday after leaving at least two people dead and displacing more than 15,000, though the region was spared a major disaster due in part to the storm’s speed.

Despite its strength, the typhoon did not linger long enough to wreak havoc in regions along its path and the weather started to improve in provinces that it had struck, including Aurora.

Still, the typhoon forced more than 15,700 villagers to flee their homes in five northern provinces and take refuge in 132 emergency shelters, according to disaster-response agencies.

Strong winds and rain knocked down trees and electricity poles, causing power outages and floods in the five provinces.

“We have yet to receive the complete details, but I think the situation is manageable,” said Ricardo Jalad, who heads the Office of Civil Defense. “Roofs of some houses were ripped off, there were fallen trees. Those are the damages we received so far, so it’s is not that serious.”

In the eastern province of Catanduanes, a man drowned after being swept by strong river currents and a farmer died after his head hit the ground amid fierce winds, provincial safety officer Gerry Beo said, adding that three fishermen had not returned home from a fishing expedition and were reported missing.

A month’s worth of rain fell Friday as the typhoon approached from the Pacific, swelling rivers and creeks and flooding low-lying farming villages, Beo said, adding that most towns in the island province of about 260,000 people have no electricity and spotty communications.

About 200 domestic and international flights were canceled and thousands of passengers stranded in seaports after inter-island ferries were ordered not to venture out in rough seas.

About 20 typhoons and storms lash the Philippines each year, adding to the many burdens in a country that’s also threatened by earthquakes and volcanic eruptions.

As Typhoon Karen, which was named after a singing bird in Cambodia, blew out, Philippine authorities turned their attention to another storm that has been spotted far out in the Pacific and may strengthen into a powerful typhoon as it moves toward the Philippines this week.