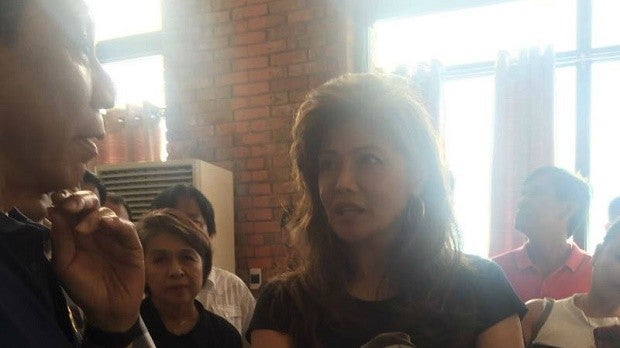 President Rodrigo Duterte met with Ilocos Norte Gov. Imee Marcos in Laoag City on Friday in time for the launch of the “Kailian March,” a four-day trek from Ilocos Norte to Metro Manila. PHOTO BY FERDINAND E. MARCOS PRESIDENTIAL CENTER

LAOAG CITY, Philippines—President Duterte on Friday said he was standing by his decision to grant strongman Ferdinand Marcos a hero’s burial, when he met with Gov. Imee Marcos shortly before hundreds of Marcos loyalists set out for a four-day caravan from Ilocos Norte to the Supreme Court in Manila.

The media was not allowed to join the closed-door meeting. But in a video footage of the 10-minute meeting, Mr. Duterte told the officials: “For me, it is a matter of law. As a lawyer, it’s very clear to me that my decision is right and I could only speak to what is the law.”

“But if something unforeseen takes place… then I will intervene. I will fly to be here immediately should there be an untoward incident,” he added.

He flew out of Laoag for Davao City.

Marcos said Mr. Duterte was supposed to visit Tarlac province but had opted to stop over in Laoag.

The caravan pushed through despite tropical depression “Karen,” which was expected to hit Central Luzon today.

“Regardless of bad weather [due to a tropical depression], we will proceed. We will appeal to the Supreme Court court to allow Marcos’ burial at the Libingan ng mga Bayani. Maybe the heavens would take pity on us,” said Minda Cristina Jusay, 62, a resident of Sarrat town who joined the caravan.

The caravan was organized after an Ilocano youth group turned over to the Supreme Court on Oct. 6 a petition seeking the Marcos burial at the Libingan ng mga Bayani. The group gathered 1.1 million signatures for the petition.

In a statement, caravan organizer June Arvin Gudoy of Batac City said their trek “echoes our call for national unity and healing [by] finally burying our dead and moving on from a past that has divided the nation for decades.”

From Laoag, Marcos supporters went to Vigan City in Ilocos Sur. —WITH A REPORT FROM GABRIEL CARDINOZA

The Supreme Court vs the Marcoses

Duterte meets Imee ahead of SC ruling on Marcos burial