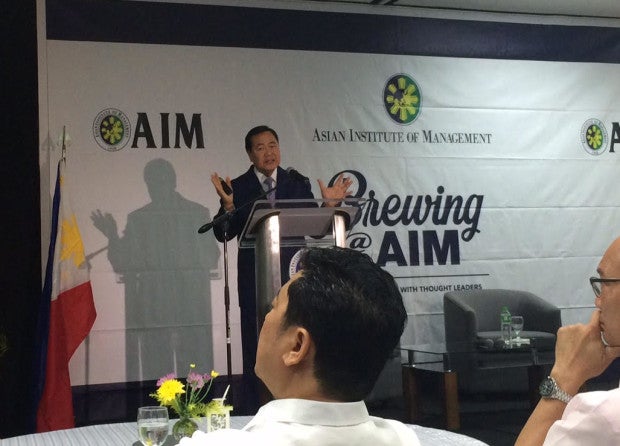 Justice Antonio Carpio at the Brewing @ AIM event in Makati City on Friday morning. Photo by Jodee A. Agoncillo

Be careful what you say in public, it just might boomerang.

Supreme Court Senior Associate Justice Antonio Carpio yesterday warned President Duterte against making public declarations that could hurt the country, as he expressed fears of the possibility of entering into a “joint development” with China that would push the Philippines to surrender areas in the South China Sea it claims part of its exclusive economic zone.

Caprio issued the warning before students and lawyers at the Asian Institute of Management’s Brewing @ AIM, where he presented his position on exercising sovereignty over Philippine territory in the South China Sea.

The magistrate said he had tried his best to inform the President about his stance on the disputed territory, and had offered to make a presentation to Mr. Duterte before his state visit to China on Oct. 20.

“The President is a different kind of person. But I sent word to make a presentation before he leaves. I am more than ready to sit down. I am doing everything despite the fact that I’m from the Supreme Court…but I cannot impose myself on him,” Carpio said.

He said he had already briefed the secretaries of defense, justice and foreign affairs, the national security adviser and the office of Presidential Communications Secretary Martin Andanar on the issue.

He was told the President had seen the slides of his presentation.

Carpio expressed concern about how the President was dealing with the territorial dispute with China.

“When the head of state makes an inaugural or national declaration, that’s binding on the state. When the President says Scarborough is not our territory, that could bind us in a subsequent case. So we have to be very careful. We don’t say those things in public that can boomerang on us,” he told the audience.

“Bajo de Masinloc or Scarborough Shoal—that’s Philippine territory. We have sovereignty and jurisdiction. You can’t say that Scarborough is not our territory. It might be taken against us in the next litigation,” he said.

Replying to a question from the audience, Carpio said that if the President concedes sovereignty claims over Scarborough Shoal, he could be impeached. “But we can never recover Scarborough forever,” he said.

Carpio noted that during the previous tribunal hearing of the South China Sea case, China offered the Philippines what it deems a “win-win” situation.

“We will send many tourists a year to the Philippines, we can do whatever we want, railway, train, whatever; we can lend you soft loans; we will send our company to invest [in huge amounts] in the Philippines,” said Carpio of China’s proposed deal to the country.

But China wanted the Philippines to concede its sovereignty and enter into a joint development with China in return, which means the country has surrendered, Carpio said.

“That was a very generous offer when you count it in dollars but we turned it down,” Carpio said.

Later, China repeated that offer and opted to share a 50-50 revenue with the Philippines, so long as the latter concedes its sovereignty, Carpio said.

Carpio emphasized the need for the Philippines to send patrol groups over our economic zone as it “beefs up military presence.” TVJ