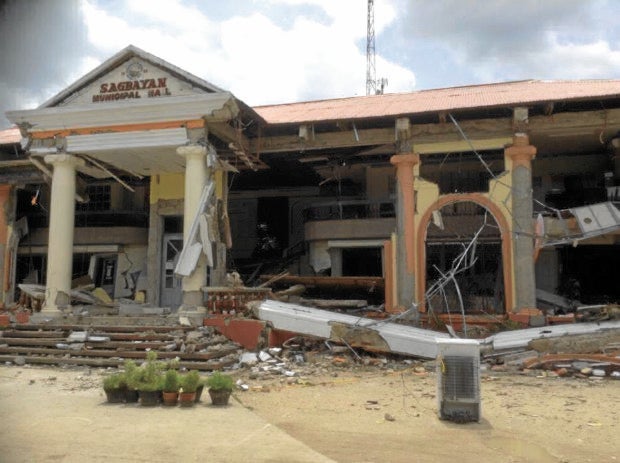 The Sagbayan town was the epicenter of the 7.2 magnitude earthquake that hit Bohol province in 2013. The town hall was severely damaged and until three years the reconstruction is on-going and it is expected to be finished in 2017. Local officials and employees continue to hold office inside their makeshift offices. Leo Udtohan/Inquirer Visayas

TAGBILARAN CITY, Philippines—Rodel Barace has been weaving baskets in different styles and sizes since he was a boy.

Like many residents of Barangay Obujan-Tagubaas in Antequera town in Bohol province, his craft was passed from generation to generation with their wares sold in Tagbiliran City, the provincial capital.

But for Barace, 30, basket weaving is more than just a family tradition—it’s a way of life.

“This is what I have been doing since I was young. I represent a community,” Barace said.

Antequera town, 18 kilometers west of Tagbilaran, is known as the island’s basket capital. It was also one of the communities hit hardest when a 7.2-magnitude earthquake shook the province and nearby Cebu City three year ago on Oct. 15, killing at least 222 people and displacing nearly half a million people.

More than 8,000 homes and centuries-old Catholic churches were destroyed, with much of the island’s 47 towns reporting damage.

The industry was left in tatters, but gradually began to pick up as Barace and the other weavers soon returned to practice their trade after a period of mourning. Every March since the quake, the town has been holding the “Basket Festival” to showcase their talent.

“The people of Antequera have been keeping the tradition alive through hard work and [their] love for the [craft],” said Russel Villas, information officer of Antequera town.

The festival reflects the Boholanos’ trait of meeting adversity head on.

From the rubble, many of the 6,000 families in Bohol’s 17 towns who lost their homes have rebuilt and moved to permanent quake-resilient shelters provided by the government and aid agencies.

In Loon, 48 families moved to a new resettlement site in May. For almost two years many of them lived in a tent city along the national highway in Sitio Taug, Barangay Basak.

“We never thought that we have a new home now,” said Rodelyn dela Serna, 46, mother of eight, whose house was destroyed.

Dela Serna and her neighbors used to live in makeshift homes made up of amakan (handwoven bamboo slats) and tarpaulin to protect their families from the elements, but a storm that hit in December a year later again forced them out. They moved to an elementary school, where life was a daily struggle until they were resettled.

Made of plywood and galvanized iron sheets, the new homes were built on a 3,000-square-meter site. The homes are modest, but sit on an area near the sea, which helps beneficiaries who are mostly fishermen.

But Renante Batal, 49, a resident of Barangay Matabao in Tubigon, is still waiting for his new home from Rebuild Bohol, a housing program of the Habitat for Humanity Philippines (HFHP).

Batal is one of the eight beneficiaries in the village. Only the house of village chief Joel Serohijos had roofing made of reinforced steel frames and walls made of tightly woven bamboo strips held by concrete.

On Saturday, Boholanos are scheduled to mark the third anniversary of the disaster solemnly, with even the Tagbilaran City Hall under rehabilitated  and not  yet ready for occupancy.

The national government has set aside P2.3 billion to repair and rebuilt 1,063 public facilities. The funds will come from the Bohol Earthquake Assistance (BEA) program and released through the Department of the Interior and Local Government (DILG). An additional P2.1 billion was proposed by the DILG to the Department of Budget and Management to fund the second phase of the rehabilitation.

Bohol quake triggers a phenomenon: Land rising from bottom of the sea