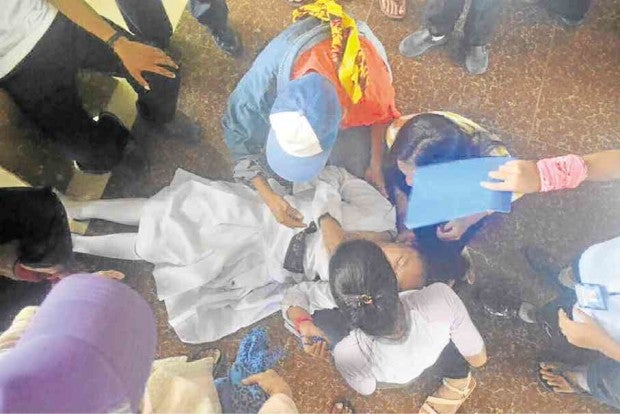 UBAY, Bohol—Amid the absence of a scientific explanation, authorities are attributing to evil spirits the mass hysteria of female students at a school in the village of San Pascual.

At least 22 students of San Pascual Academy (SPA) convulsed, screamed and fainted inside their classrooms, prompting teachers to suspend classes.

Most of the students, who had been possessed by evil spirits according to Alacida, were from Grades 7, 8, 10 and 11 classes.

Hans Atup, a staffer at the Ubay mayor’s office, said most of the students were brought to the adjacent San Pascual Church where prayers were immediately offered.

Alacida said members of the rural health office went to the school and checked on the students and found that their vital signs were normal, except for eight students who were brought to Don Emilio del Valle Memorial Hospital for more medical tests.

“They became weak after shouting and their blood pressure increased,” he said.

SPA, a Catholic and private high school, was established in 1968. Every morning, the school requires students to pray the rosary before classes.

The incident in San Pascual came a week after 41 female students of Japer Memorial School in Barangay Catalina in Sagbayan town were also reported to have been possessed by evil spirits.

The tally of supposedly possessed students rose in a span of almost a month until Thursday last week.

According to residents, the hysteria started after a gmelina tree inside the school was cut down. The incident prompted parents not to send their children to school last week. All classes resumed on Monday, however.