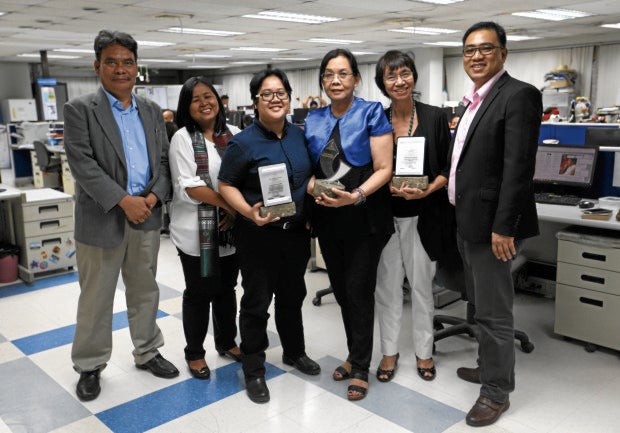 For coming out with a special series on young martyrs who died during martial law, the Philippine Daily Inquirer’s Research Department won the Best Investigative Report award at the 38th Catholic Mass Media Awards (CMMA) held in Pasay City on Wednesday night.

The team, led by Inquirer Research head Minerva Generalao, won for its “Young Heroes” series, which came out in time for National Heroes’ Day last year. Other members of the team were Kate Pedroso, Eline Santos, Almi Atienza and Marielle Medina.

Ador Mayol of the Inquirer sister publication, Cebu Daily News, also won in the Best News Coverage category for the series on the International Eucharistic Congress in Cebu in January, as well as in the Best Special Feature category for his piece, “Journey Behind Bars.”

Fifteen entries from the Inquirer made it as finalists in seven categories.

Last year, the Inquirer bagged the best news coverage award for its reportage during the fourth papal visit in the Philippines in January 2015, one of five awards the Inquirer won that night.

The CMMA was established in 1978 by the late Jaime Cardinal Sin, then archbishop of Manila, as the means by which the Church pays tribute to those who “serve God by means of the mass media.”