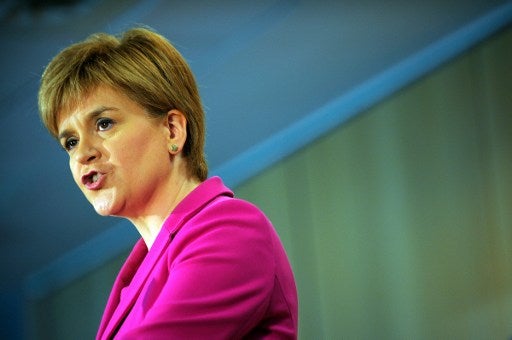 Scottish First Minister Nicola Sturgeon and leader of the Scottish National Party (SNP) speaks at a press conference in Stirling on September 2, 2016.
Sturgeon launched a new survey on independence, saying the Brexit vote had changed the conditions that existed when Scotland voted against secession in 2014. AFP PHOTO

LONDON—Scotland’s pro-EU leader Nicola Sturgeon, will on Thursday accuse the British government of “xenophobia” and “scapegoating of foreigners” in its approach to Brexit, according to comments released by her office.

First Minister Sturgeon has been a vocal critic of London’s handling of the June 23 referendum which saw Britain vote to leave the European Union.

In Scotland 62 percent voted to remain part of the 28-country bloc.

Opening her party’s annual conference in Glasgow on Thursday, the Scottish Nationalist Party leader is expected to take aim at the ruling Conservative Party’s handling of the referendum outcome.

“The right wing of the Tory Party is now in the ascendancy and it is seeking to hijack the referendum result. Brexit has become Tory Brexit.

“They are using it as license for the xenophobia that has long lain under the surface — but which is now in full view,” Sturgeon is due to say.

Earlier this month the Conservatives held their own conference, during which the party announced a proposal for companies to publish lists of foreign employees. The government backtracked on the plan following widespread criticism.

Speaking at the SNP event, Sturgeon will describe the Conservatives conference as “a disgrace” during which “we heard an intolerance towards those from other countries that has no place in a modern, multicultural, civilized society”.

Sturgeon promised to explore “all options” for Scotland in the wake of the June vote and Brexit is expected to dominate discussions in Glasgow.

She has vowed to explore “all options” to protect Scotland’s place in the EU after Scots bucked the national trend by voting to remain in the bloc.

For many in her party, this means a second vote on independence from the rest of the United Kingdom — even though a first referendum two years ago saw voters reject independence by 55 percent.

Sturgeon is also a critic of the “hard Brexit” seen to be favored by the central government, which could see the UK leave the European single market in order to have more control over immigration.

Sturgeon will define such a tough stance as having “ruinous consequences” and argue the government’s line is not the approach wanted by “leave” voters.

“They certainly didn’t vote to throw economic rationality out of the window.

“They didn’t vote to lower their own living standards or to sacrifice jobs and investment. They didn’t vote for our businesses to face tariffs or for holiday-makers to need visas.

“They didn’t vote for the scapegoating of foreigners,” Sturgeon will tell party members.

London plans to introduce a “Great Repeal Bill” to end the authority of EU laws, which SNP parliamentarians are expected to vote against.